The Founding Sprit and Educational Philosophy of Ritsumeikan

The Ritsumeikan Trust offers a comprehensive education from primary school through to graduate school, aiming to foster leaders for the globalized, information intensive society of the 21st century. Our nine affiliate schools keep in close contact with our post-secondary institutions, and provide information education and international education programs, including exchange activities with people of different cultures.

Ritsumeikan has become an integrated academy with a rich culture of individuality and international awareness accommodating a total of 49,000 students. The current Ritsumeikan Academy has campuses in Kyoto, Shiga, Hokkaido, and Oita and encompasses two universities, four high schools, four junior high schools, and one primary school. Ritsumeikan fosters the learning and development of individual talents in order to nurture just and ethical global citizens.

The history of Ritsumeikan dates back to 1869 when Prince Kinmochi Saionji, an eminent international statesman of modern Japan, founded "Ritsumeikan" as a private academy on the site of the Kyoto Imperial Palace. In 1900, Kojuro Nakagawa, former secretary of Prince Saionji, established Kyoto Hosei School, an evening law school that was open to working people. This school formally adopted the name Ritsumeikan in 1913 and was finally given the status of a university in 1922.
The school spirit of liberalism and internationalism advocated by Prince Saionji was combined with the ideals of academic freedom and vivacity pursued by Kojuro Nakagawa, and became a tradition of the university. This tradition also survived the intense suppression of the prewar days, as evidenced by the fact that Ritsumeikan University accepted seventeen professors who were forced by the government to leave Kyoto Imperial University for their pacifist activities.
After World War II, Ritsumeikan adopted the educational philosophy of peace and democracy, faithful to the spirit of the Japanese Constitution and the Education Fundamental Law. In 1948, Ritsumeikan became one of the first Japanese universities to be reorganized under the new education system. Ritsumeikan carried out extensive reforms to ensure democratic administration of the university to better serve society as an educational institution open to the public.
In the 1990s, with the changes leading to a globalized information society, each faculty went through curriculum revisions to accommodate the global complexities and innovations now affecting higher education. Over the century, the Ritsumeikan Trust has evolved into a comprehensive educational institution consisting of two universities, four senior high schools, four junior high schools and one primary school.

Ritsumeikan traces its roots to Prince Saionji’s private academy of the same name, established in 1869.It was officially founded in 1900 by his protégé, Kojuro Nakagawa,
as the Kyoto Hosei Gakko (Kyoto School of Law and Politics), later to take on the name “Ritsumeikan”. The name is derived from a passage in the Jinxin chapter of the Discourses of Mencius, and means “a place to establish one’s destiny through cultivating one’s mind.” Ritsumeikan’s founding ideals are “freedom and innovation” and reflecting upon its wartime experience, it committed itself to a core educational philosophy of “peace and democracy” after World War II. Ritsumeikan has faced the challenges of the times by pursuing an independent path to rise above adversity and has become the comprehensive private educational institution that it is today through extensive cooperation and support from both within and outside Japan.
Ritsumeikan, as a Japanese institution located in the Asia Pacific region, is committed to sincerely reflecting upon history and to building an institution where many cultures coexist in the spirit of international mutual understanding. Ritsumeikan will build relationships of trust, through research and education, as well as sports and cultural activities, and establish its roots in the local community, to create an academic institution open to international society. Ritsumeikan will strive to strengthen links with society and promote its institutional development by fully utilizing the characteristics of a private academic institution, the participation of its faculty, staff and students, and the support of alumni and parents, while respecting the principles of autonomy, democracy, transparency, non-violence and justice.
Ritsumeikan will pursue the creation of universal values based on academic freedom and search for solutions to the pressing issues facing humankind, with its educational endeavors based on its founding spirit and educational ideals, bearing in mind “to believe in the future, to live for the future”. Ritsumeikan will foster learning and the development of individual talents in order to nurture just and ethical global citizens.
Ritsumeikan, as an institute of education and research, pledges to promote peace, democracy and sustainable development in Japan and throughout the world, in keeping with the spirit of this Charter. 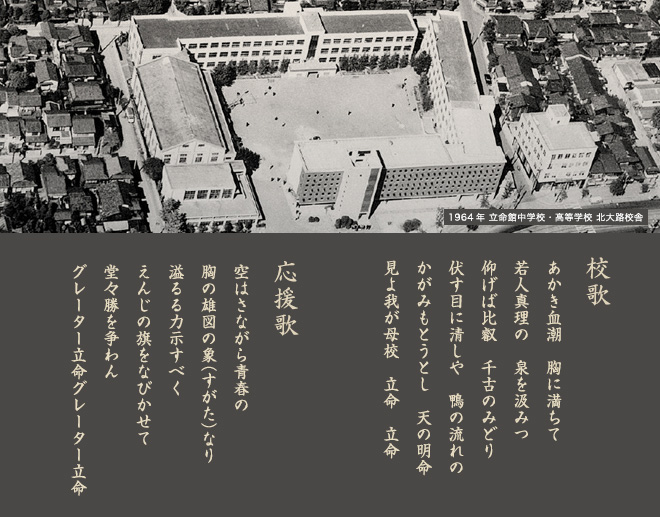