The desires of people connectfictional scenes in a tale to actual places.

“The ancient capital, Kyoto” is a poetic epithet often used when one speaks of Kyoto. These words overlap with images such as “a town that still retains the atmosphere of the elegant culture of the Heian Period, over one thousand years ago.” However, in reality, Kyoto has been formed by the wishes of people “who desired Kyoto to be so,” according to Kei Sudo. Sudo, who studies Japanese classical literature, focuses on The Tale of Genji, and explores “how Kyoto remembered this tale over time.”

The Tale of Genji is said to have been written by Lady Murasaki (Murasaki Shikibu) during the Heian Period (AD 794 to 1185). The original book by Lady Murasaki is no longer extant. However, manuscripts and editions made in later eras have been handed down to the present age. Besides these, digests and annotated editions were written, and the book has been passed down and inherited in various formats, such as being included in haiku (Japanese poems of seventeen syllables) and tanka (short poems comprising of thirty-one syllables), as well as being used as a subject for craftworks. “How did readers in each era read The Tale of Genji? From the way in which past readers understood these stories, it is possible to acquire a glimpse into how they related to The Tale of Genji,” according to Sudo. 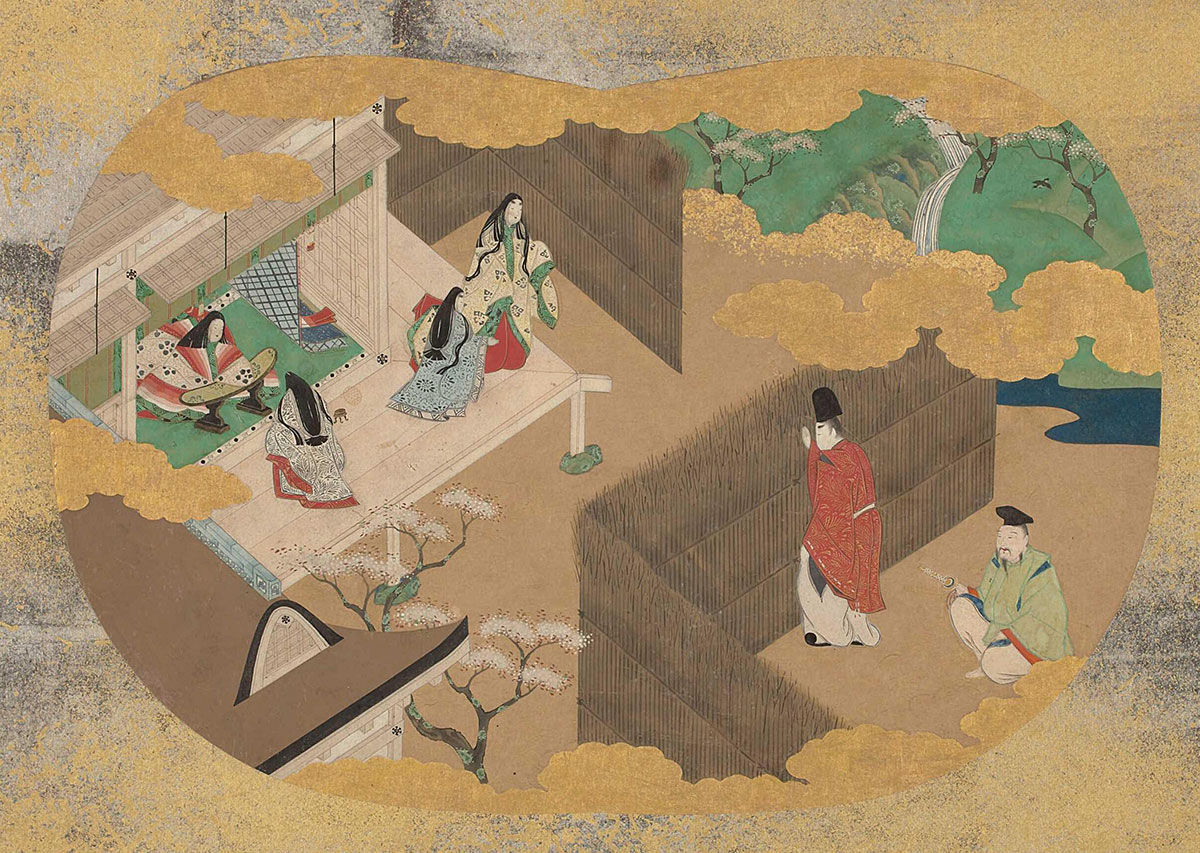 A scene from the volume Wakamurasaki in The Tale of Genji, depicted in “The Album of Scenes from The Tale of Genji in the Form of Fans.” (Early Edo Period.) The “Waterfall of Tears” is depicted on the upper right.

For example, a study conducted by Sudo focused on the poem referred to as Fukimayou (Blow About), written by Genji. This poem is found in the chapter titled Wakamurasaki in The Tale of Genji. In this volume, Genji paid a visit to the holy man living at “a certain temple in the northern hills” to recover from an illness. There, he heard the “sound of a waterfall,” and composed the poem “The winds blow about, down the depths to waken me, from the dream I had. In my eyes the tears well up, the sound of a waterfall” (The wind is blowing down the depth of the hills carrying the sound of the sutras. This awakens me from the dream of earthly desires, and the sound of the waterfall moves me to tears even more.)

The location of this “certain temple in the northern hills” is not mentioned at all in The Tale of Genji. However, Sudo says that the interpretation that the temple was Kurama-dera spread widely due to the influence of Eiri Genji and Kogetsusho published during the Edo Period.

Moreover, there is actually a waterfall near Kurama-dera named “Waterfall of Tears,” according to Sudo. Indeed, birds-eye view maps of Kyoto painted by the cartographer Hatsusaburo Yoshida, who gained popularity from the Taisho to the early Showa Period, depict the “Waterfall of Tears” as one of the famous sites at Kurama-dera. Sudo thinks that “this was created because the people of later generations wanted Genji to be in the place where they were living.” The desire to see him having “lived in real life” connects the tale—which is supposed to be fiction—to an actual place, and it eventually was established as a “related place.” In Kyoto, traces of such activities exist everywhere. 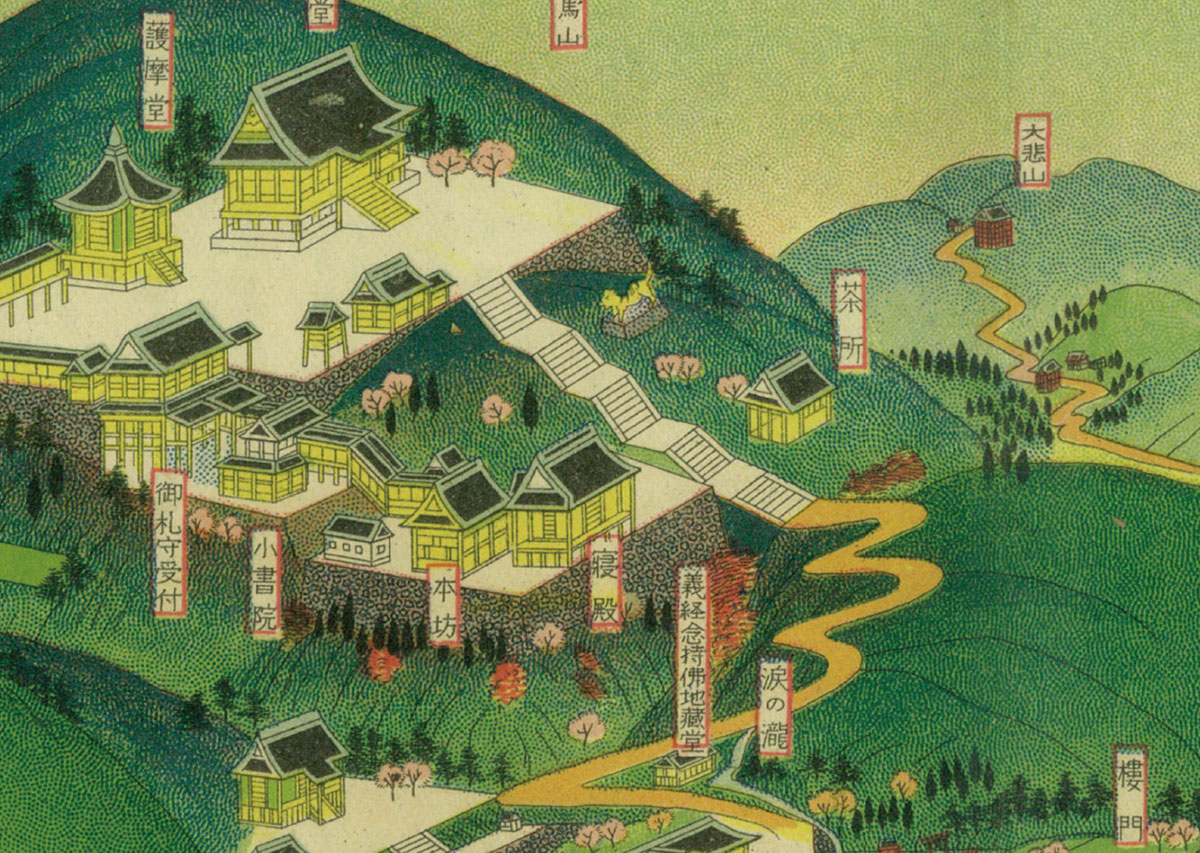 Tour guide information “Kurama-dera” published in 1924, painted by Hatsusaburo Yoshida. “Waterfall of Tears” is identified just past the bottom of the stairs in front of the main hall of the temple. It is evident from this that the scene of “the certain temple in the northern hills” depicted in the volume Wakamurasaki is Kurama-dera, and that the episode where Genji sheds his tears is linked to a real place. 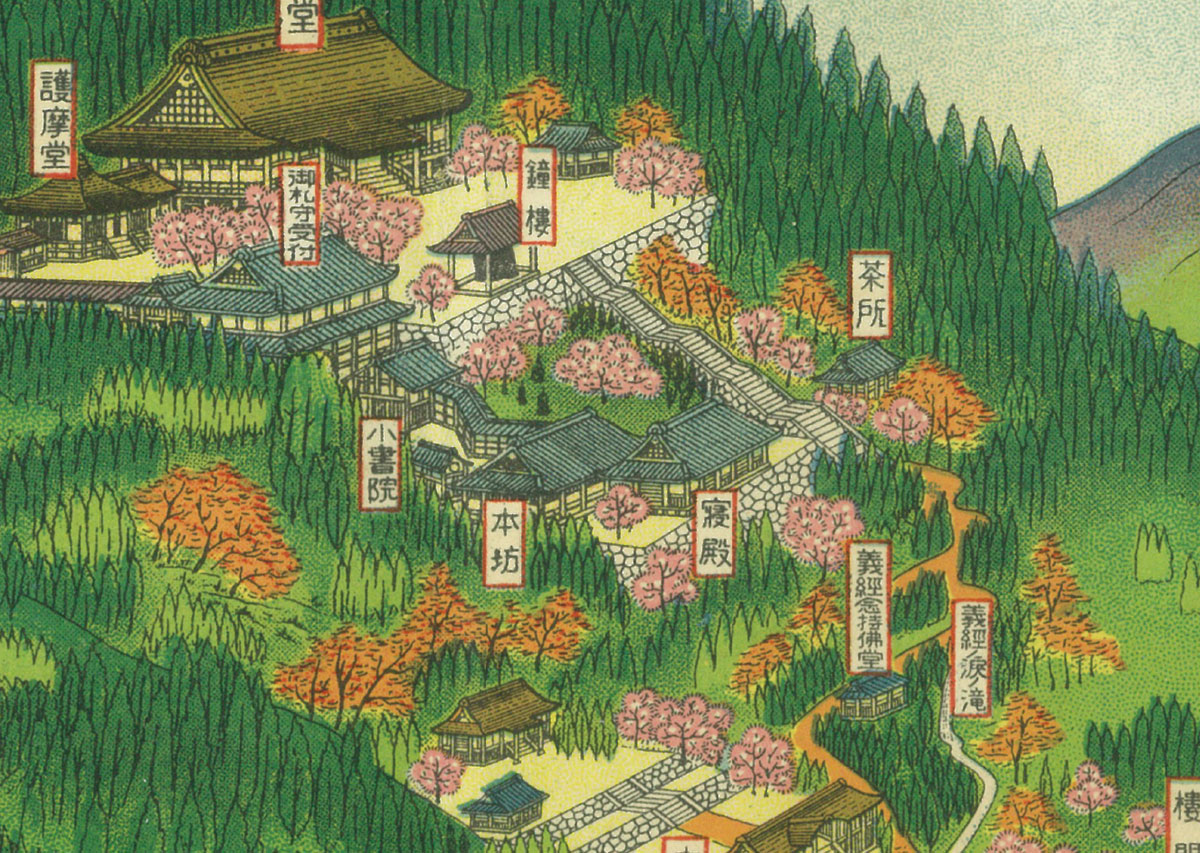 “Kurama-dera Temple Guide” published in 1926. Here, it is written as the “Waterfall of the Tears of Yoshitsune.”

Sudo also pointed out other issues. There is a historical account suggesting that the Fukimayou poem that was composed by Genji in the volume Wakamurasaki in The Tale of Genji was misunderstood as a poem authored by Minamoto no Yoshitsune (the military commander of the Minamoto clan), and this was passed down over the ages. Hisataka Asaka, a Japanese classical scholar of the Edo Period, visited Kyoto twice and wrote a chronicle about his visits. According to Sudo, who researched this, there is a passage saying that Hisataka, who visited Kurama in his second trip in 1702, asked the guide about the poem of “Genji” that was related to Kurama, and was surprised when he noticed that the guide misunderstood “the poem as belonging to Yoshitsune.” It is said that Yoshitsune was trained at this Buddhist temple of Kurama during his early childhood. Since this place was originally associated with Yoshitsune before anyone noticed, the episode in which Genji composed the poem Fukimayou was misattributed to Yoshitsune, who also shares the same clan name (Genji literally means the Minamoto Clan. Gen is one of the ways in which one can read Minamoto). In birds-eye view maps other than the ones painted by Hatsusaburo Yoshida during the early Showa Period, “Waterfall of Tears” is depicted as the “Waterfall of Tears of Yoshitsune.” “The reality of that era becomes clearer through such discourse, including these errors,” states Sudo.

Sudo mentions the example of the area around Uji City in Kyoto Prefecture, famous for being associated with The Tale of Genji. This area was often described as the battleground mentioned in war tales, including The Tale of the Heike, until about the early Showa Period. Sudo reveals that until the Second World War, people were particularly passionate about such war tales. After the war, when it was time to consider “how to conceptualize Kyoto” once again, “Kyoto as the stage of The Tale of Genji” re-emerged, with its atmosphere reminiscent of the culture of the dynastic age.

There are many elements which could represent Kyoto. “The real pleasure of this research is found when we can pick up on the thoughts behind selecting The Tale of Genji in each era among all such elements,” Sudo states. “Kyoto stands out from the rest of the nation with significantly more factors that superimpose the tales of the past on currently existing dwelling places. This probably means that there is enough influence or history that can support people’s passions.” What kind of stories are people trying to superimpose onto Kyoto? Sudo believes that by examining this issue, the attitudes of people living in that era and the society they encountered will come to light. He says, “I hope this becomes one of the factors examined when considering contemporary society.”

Sudo reveals that among many tales, The Tale of Genji has been read and passed down over a span of more than one thousand years to this present age because, in each era, the people had a desire to tell the story. We wonder what stories will be told alongside Kyoto in a hundred years. 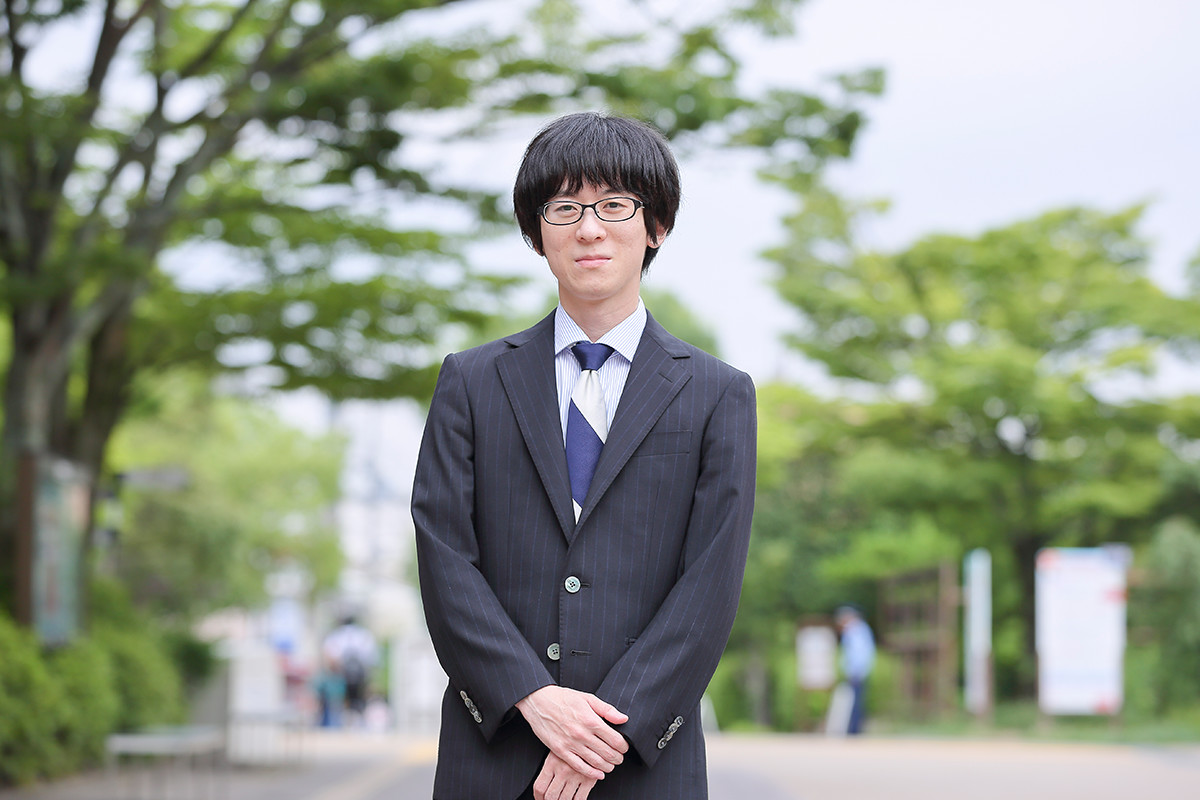