Digitally archiving the tangibles and intangibles relating to cultural assets and historical heritage.

During the month of July, in which the Gion Festival takes place, the city of Kyoto is filled with an atmosphere more spectacular than usual.

The Gion Festival is the festival of Yasaka Shrine and has been celebrated for more than 1,100 years since the Heian Period. It is not merely an event; it is said to be a microcosm of Kyoto’s history and culture, subsuming manners and customs, religion, art, and entertainment. Its highlight is the heroic and magnificent Yamahoko Junko (parade of decorated floats). A total of 33 floats are towed through the city twice, once during saki matsuri (first half of the festival) and then during the ato matsuri (second half of the festival), to the iconic sounds of the Konchikichin of Gion Bayashi (Gion Festival music).

With the development of digital technology, attempts to archive such tangible and intangible cultural assets digitally have become more popular worldwide. “By leveraging the strengths of digital technology, the possibilities will expand not only to preserve the cultural assets themselves but also to utilize them,” said Satoshi Tanaka, one of the world’s leading researchers in the technological development of digital archives of cultural assets and historical heritage. One representative achievement is the digital archiving of the Yamahoko (decorated floats) of the Gion Festival. Tanaka succeeded in accurately measuring the “Fune-hoko,” which is a famous festival float with the unique shape of a boat, using stereoscopic measurements, such as laser measurement, and in creating a three-dimensional see-through visualization of the internal structure using his original technology.

Laser measurement is a method of obtaining shapes by measuring the distance to the object with laser beams. The score of the three-dimensional point group (point cloud), the data obtained by measurement, ranges from tens of millions to hundreds of millions of points. While it is possible to obtain extremely subtle data, processing such a massive amount of data can become a challenge. Tanaka considered the massive amount of data to be an advantage and devised a method to utilize the information proactively. He developed the world’s first technology that creates a three-dimensional see-through visualization model using the three-dimensional point cloud data that constitute the point cloud with the Stochastic Point-based Rendering method, which utilizes the fact that “the light emitted from objects closer to one’s viewpoint has a higher probability of reaching the eyes.” Using this method, it is possible to achieve precise see-through visualization, not only of the external appearance of the three-dimensional shape but also of the interior, including the hanging decorations, the surrounding lanterns, and turrets. This can all be done without performing polygonization, a process which is usually indispensable when generating three-dimensional images with computer graphics (CG). In addition to reproducing the exact shape based on actual measurement values, the method also enables opacity adjustments, allowing one to view the hoko from various viewpoints, such as seeing the inside from a semi-transparent exterior of a hoko or enhancing the clarity of only the parts that one wants to see. “Being able to reproduce what the human eye cannot see is one of the strengths of a digital archive,” Tanaka said.

In recent years, the scope of digital archives has expanded from archiving tangible things to encompass intangible things, such as performance arts (e.g., dance and theater), lifestyles, folkways, customs, ceremonies, and festivals. In Fune-hoko’s digital archive as well, Tanaka collaborated with researchers from other fields and recorded and reproduced in high definition and high fidelity not only the three-dimensional shape, but also the process of assembly, the circumstances of the parade, and even the accompanying musical sounds during the festival. 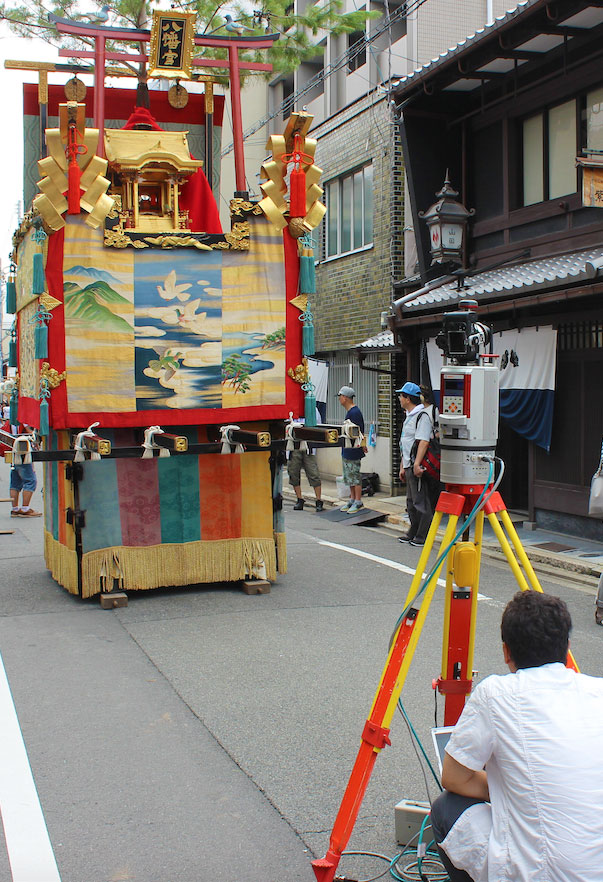 Tanaka has also been working on digitally archiving the Hachiman-yama float since 2016. “The Yamahokos of the Gion Festival are assembled before the parade every year and disassembled again when the parade is over; the disassembled floats are kept in storage until the following year. There are no records on how to assemble the hundreds of components and objects used as their decoration; this has been passed down through oral tradition. We are trying to archive the range of processes in its entirety, starting from the assembly of the Yama and Hoko floats (known as Yama-date and Hoko-date), all the way down to their disassembly,” Tanaka revealed.

The Hachiman-yama has four pillars as a framework and is assembled in the order of base, tow bar, balustrade, pine tree, and objects used for decoration. Tanaka and others went to the place where Yama-date takes place several days prior to the parade and expeditiously conducted laser measurements and SfM photogrammetry so as not to interfere with the progress of the event.

“We calculated the reference point from the coordinates of the laser measurement; then, by setting the reference point of the coordinates of SfM photogrammetry to those common areas, we were able to set the point group data of the laser and photograph to common coordinates. Also, we carried out a process aimed at minimizing errors in the point group, and then completed a three-dimensional semitransparent see-through image combining the point cloud data of both laser and photographic measurements.”

The Yama-date (assembly of a Yama decorative float) of Hachiman-yama. A process taking five days, in which the base, tow bar, balustrade, pine tree, and objects used for decoration are assembled in order with four pillars as its framework.

What is so rare about the Gion Festival, as well as Yamahoko Junko, is that they were passed down for over 1,100 years with hardly any changes in their substance. What has made this possible is the strong passion for preservation within the Kyoto locals who are involved in this divine service. “In digitally archiving traditional events, it is necessary to spend time not only on the technology but also to build a relationship with the people in such areas,” Tanaka said. It can be said that this archive has only been realized because Ritsumeikan University’s research structure and the research led by Tanaka were so rooted in Kyoto.

To make full use of the three-dimensional see-through visualization technology on a global scale, Tanaka is currently undertaking a project of three-dimensional measurements of World Heritage Sites in Indonesia. With Tanaka’s technology, it may be possible to see the cultural assets and cultural heritage from around the world through a fresh, new perspective. 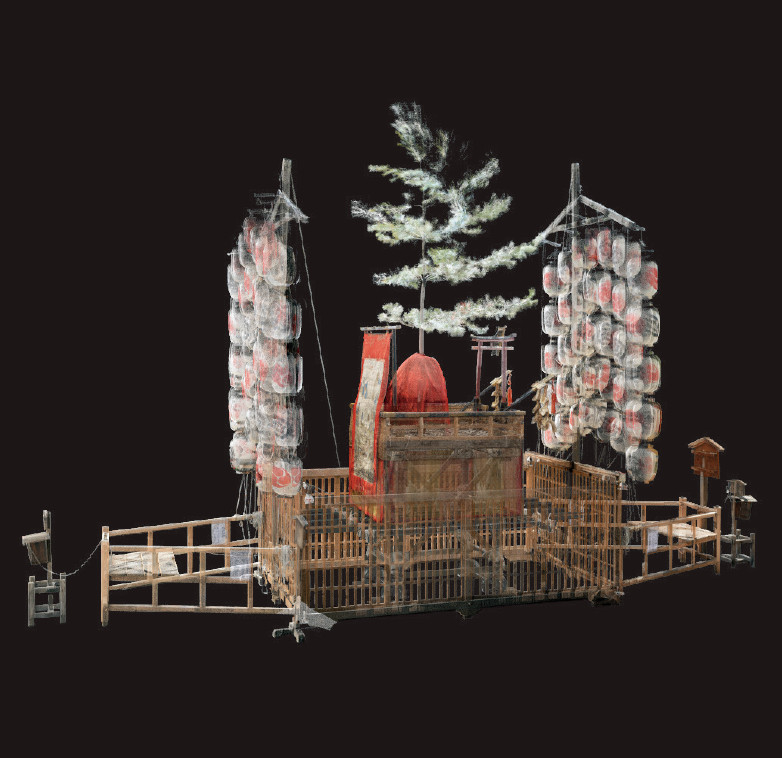 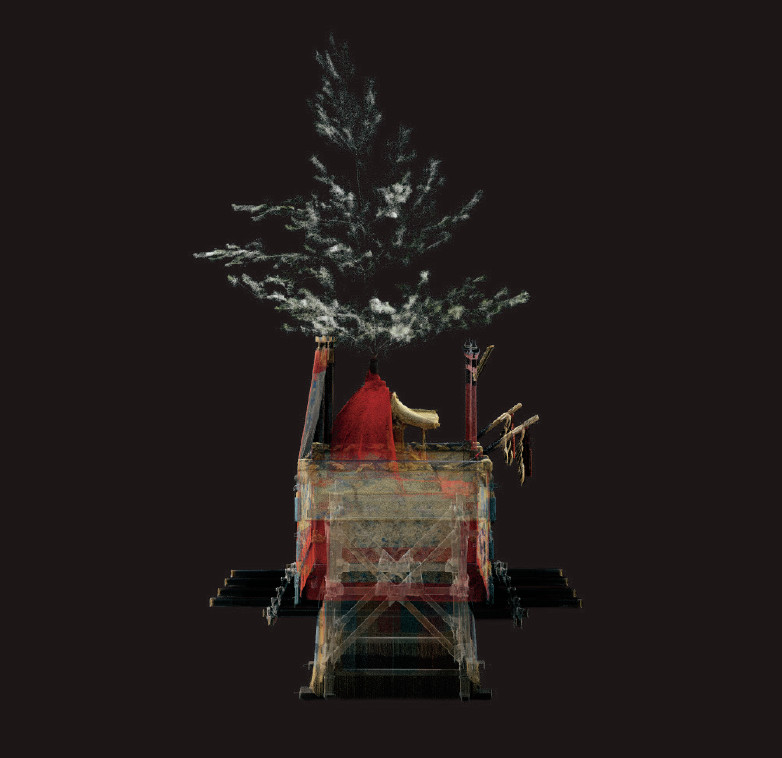 See-through visualization image of Hachiman-yama. One can rotate the image or change its degree of transparency, allowing for variety and flexibility in observations. 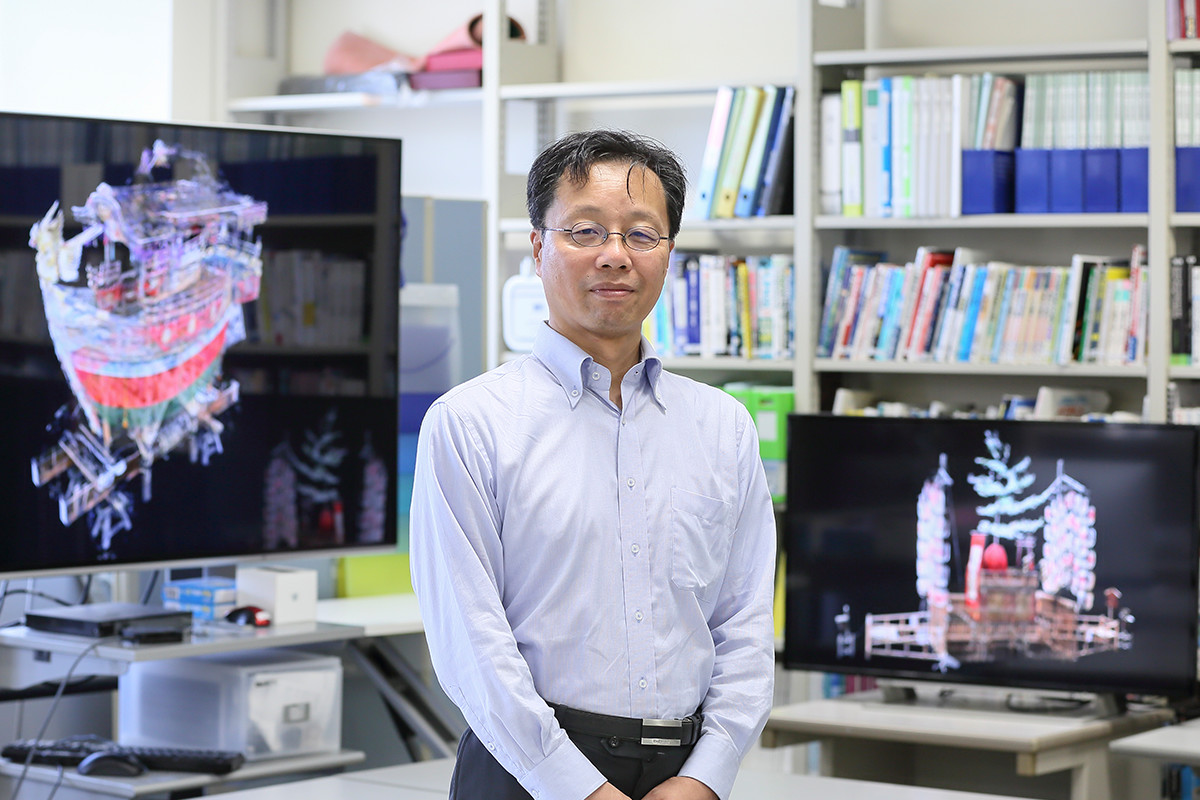