Digitally Archiving the Space of KyotoAcross Place and Time

Since the transfer of the capital to Heian-kyo, Kyoto still lives its over 1,200 years of history. If we could see the transition of Kyoto across time and space, from the past, present, and into the future, what kind of landscape will be reflected in our eyes?

Keiji Yano is working on making a digital diorama by digitally archiving the space called Kyoto as a whole, based on geospatial information, such as maps and picture maps. In Virtual Kyoto, which he first worked on in 2002, he tried to reconstruct the townscape of modern Kyoto in three dimensions on a computer, by using a Geographic Information System (GIS), which was state-of-the-art at the time, and Virtual Reality (VR) technology. “In addition to producing a 1:25000 scale three-dimensional topographic map using GIS software, I also added information obtained by measuring the heights of 400,000 buildings, and built a precise three-dimensional model of the urban area of modern Kyoto,” Yano explained. Virtual Kyoto provides fly-through and walk-through functions. These functions allow one to change their vantage points from one instant to another. You can be viewing Kyoto from the sky with a birds-eye view at one moment, then in the next moment be walking along the Shijo-dori Street, looking around the interior of the Minami-za (the primary kabuki theater in Kyoto) or the Kyo-machiyas (traditional Kyoto wooden townhouses), and so on. The Google Earth service started only in 2005. It is amazing to think about what Yano was able to achieve a few years before that. “A new academic field named ‘Digital Humanities’ that combines human studies and information technology, which traditionally did not have anything in common has become popular around the world in recent years,” Yano explained. Virtual Kyoto was precisely the forerunner in this. 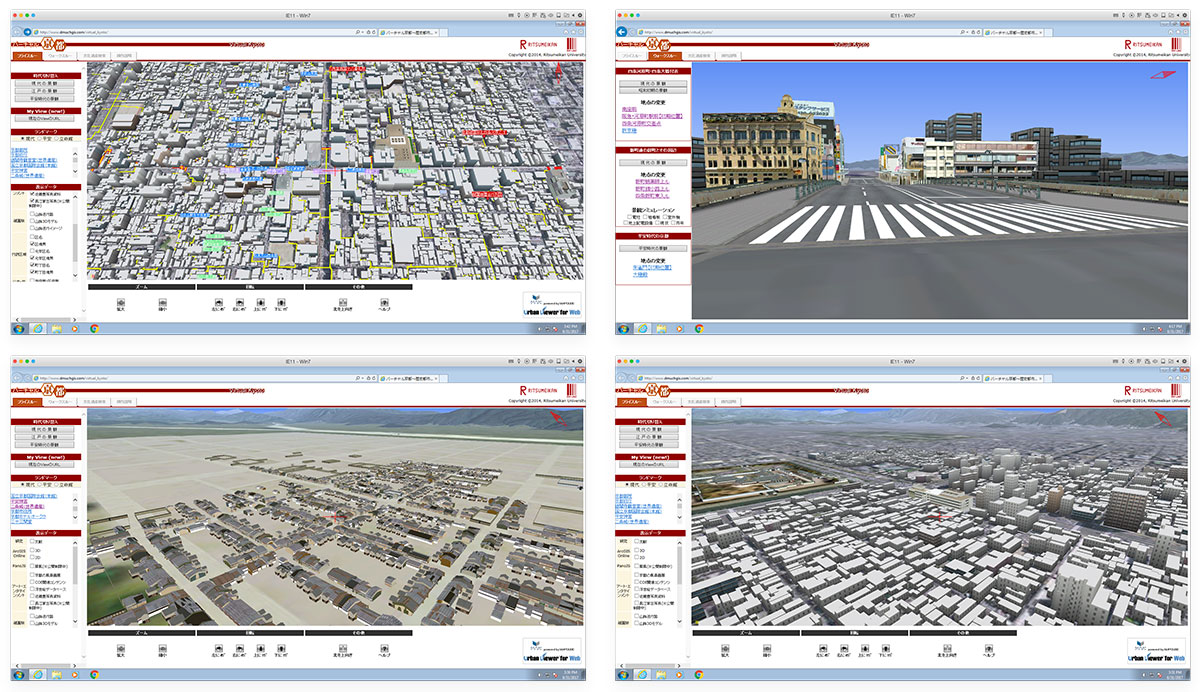 Virtual Kyoto
Kyoto is recreated in 3D on web browsers with databases, such as Ukiyo-e, Rakuchu Rakugai-zu (paintings and drawings both inside and outside the Kyo capital), and the photographic materials by Yutaka Kondo are embedded in it and, also, it is possible to go back and forth among the townscapes in the Heian Period, the Edo Period to the present day.
Please plug in after launching IE

“Data with information on locations are not limited to modern maps,” says Yano. The creative aspect of Yano’s research is that the Kyoto of various periods is represented three-dimensionally using old maps and historical picture maps. In Virtual Heian-kyo, based on information obtained from excavations and historical documents, the inside of the capital of Heian-kyo is represented using three-dimensional VR. Buildings, such as the Rajomon Gate and the Daigokuden (Council Hall in the Imperial Palace), are also realistically reproduced by a three-dimensional CG model using the “Heian-kyo Restoration Model Design Drawing” and other documents as a reference. “I am trying to create a ‘four-dimensional GIS’ that also includes the time axis from Heian-kyo to the present day, reproducing the townscape during the periods of Edo, Meiji, Taisho, and Showa as well.”

In 2016, Yano published the Overlaying Maps of Modern Kyoto, which focuses on the Meiji Period until the end of the Second World War. It uses archives such as a “tentative topographic map (Kasei-zu)” from the middle of the Meiji Period, “city planning basic maps” from Taisho to early Showa periods, and an “official topographic map (Seishiki-zu)” published in 1912 (Taisho 1). The strong point of this web based map system is that one can display several maps as overlays over Google Maps. It is not possible to view maps of different scales, orientations, shapes, etc., from the same viewpoint by simply overlaying them as they are. Yano identified the position information (coordinates) of several points in each map and aligned the position of each point using the georeferencing functions so that the different maps can be displayed on the same screen. By changing the degree of transparency of the maps, it becomes possible to see through the maps and compare each one.

Two types of “large-scale maps of Kyoto City (Kyoto shi meisaizu)” that are extremely meaningful for academic research are also published in the Overlaying Maps of Modern Kyoto. One is a collection of 291 paper maps discovered at the Kyoto Prefectural Library and Archives (currently the Kyoto Prefectural Institute, Library, and Archives) in 2010. Although these maps were produced and published prior to 1927 (Showa 2), it is estimated that many entries continued to be made until a few years after the end of the war. Buildings in Kyoto City are depicted one by one, and color-coded according to the purpose of the building, such as shops or conventional residences, as well as the type of business of the establishment and the number of floors of the building. “However, an original version of these maps where no entries had been made, actually exists,” Yano says. They were the “large-scale maps of Kyoto City (Kyoto shi meisaizu)” comprised of 288 sheets discovered at the residence of the Hasegawa family in Minami Ward, Kyoto City in 2014. It has no coloration or retouches. Yano and others scanned these two types of drawings one at a time with high resolution, and aligned and synthesized them one by one using georeferencing. “We can compare the buildings in Kyoto City in the Taisho Period and the postwar period exquisitely by using the two detailed maps. It is also very interesting as research material,” Yano says. 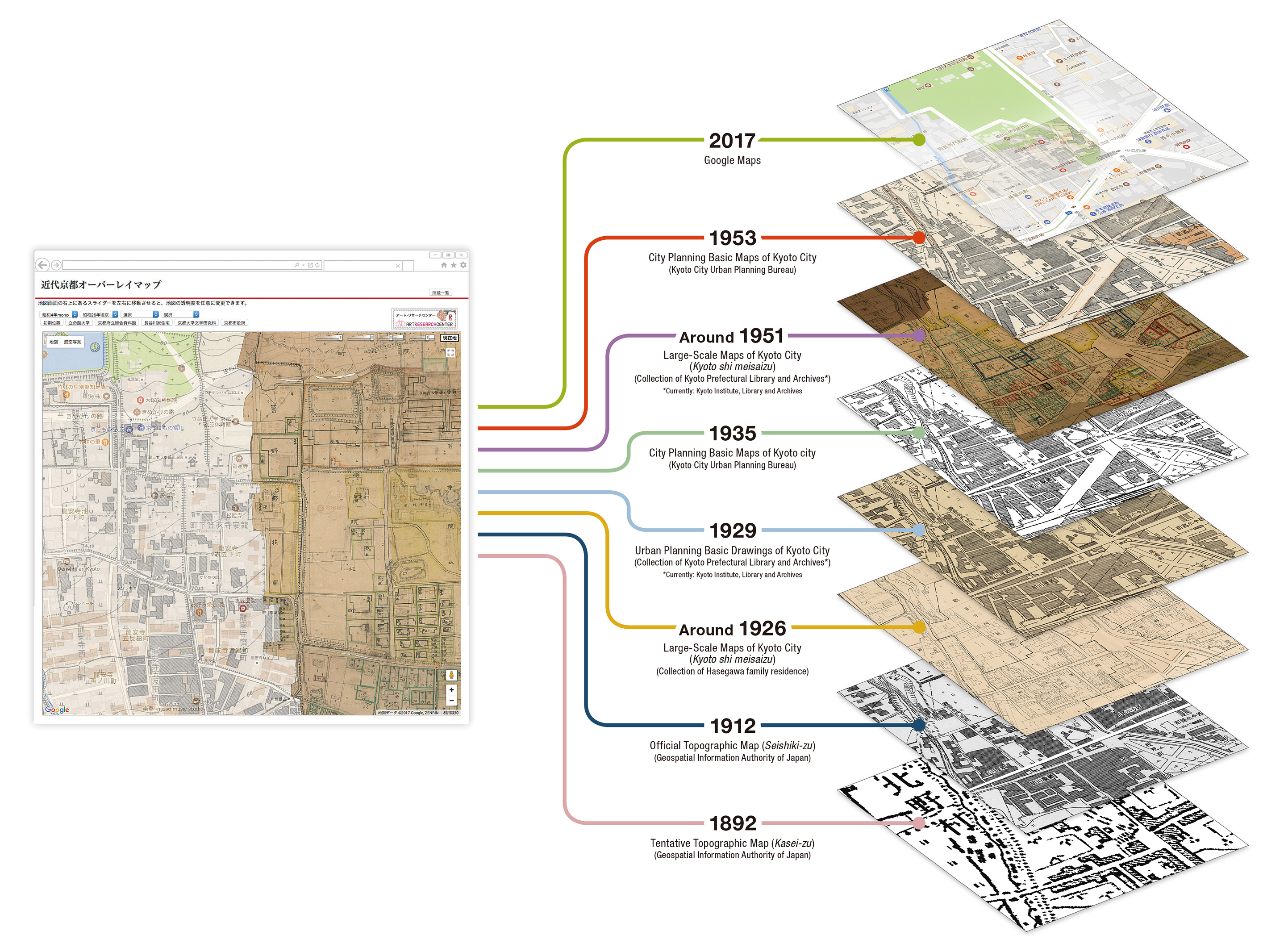 Overlaying Maps of Modern Kyoto
It is possible to overlay maps of Kyoto City in the Meiji, Taisho, Showa, and present-day periods and compare them in detail while changing the transparency with a slider.

Other unique and valuable archives include the Folding Screens of Scenes In and Around Kyoto. It is said that there are about 170 pairs of Folding Screens of Scenes In and Around Kyoto in Japan and overseas, including items considered as national treasures and important cultural assets. As part of the project of the Art Research Center at Ritsumeikan University, where Yano and others play a key role, they are trying to consolidate and archive these assets in a single place. In addition to collecting data regarding well-known digitized folding screens, such as the Uesugi Version and the Funaki Version, Yano and others handled some other items from photographs, such as the Shoko-ji Temple Version and the Seigan-ji Temple Version, and some are published in the Portal Database of Rakuchu Rakugai-zu (paintings and drawings both inside and outside the Kyo capital). 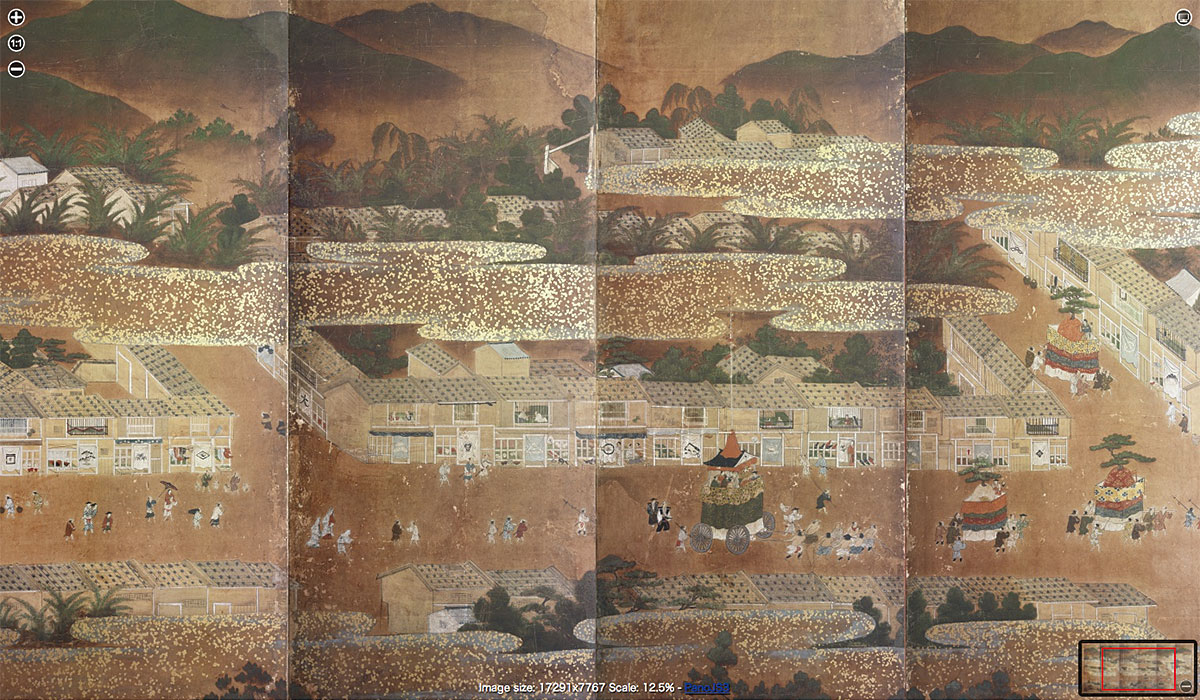 Portal database of Folding Screens of Scenes In and Around Kyoto

The achievements of Yano and others have a big impact because they are generously publishing a valuable and large digital archive on the Internet. It is a treasure trove of historical and geographical documents that are useful as research materials for researchers. Recently, a discussion on the occupation of Kyoto after the Second World War was published using maps accumulated in this way. Interdisciplinary research is progressing using archived information. Also, the archive is widely used as sightseeing and learning tool for the general public. It is also meaningful as a material to understand the past, including in the field of community development by local residents, which has flourished in recent years.

The things we begin to see by overlaying multiple maps of different scales and shapes onto one sheet.

The Digital Archive of the Historical City of Kyoto that Yano is aiming to produce includes not only three-dimensional space but also content such as literary works, paintings, and photographs, as well as intangible cultural assets such as festivals including the Gion Festival and traditional arts. Yano does not simply list them but has released them with geospatial information, such as maps, as a platform linked to a place. One of the recent achievements is the archiving of about 80,000 photographic negatives of the architecture historian Yutaka Kondo, who photographed Kyoto from the 1930s to the 1970s. They are collaborating with Kyoto Prefecture to scan the photographs that were donated to the Kyoto Prefectural Library and Archives, one by one. They have also identified location information from the photographs, and have constructed a system that allows users to view the photographs from the map. Approximately 50,000 pictures have already been released.

As part of this effort, Naomi Kawasumi has archived about 2,000 photographs of the Kyoto City Tram from around the 1960s. “We organized a research group, identified places reflected in the photographs with the collaboration of experts, and released those photographs and data with location information. There were some pictures which their location could not be identified. We also added a system that allows people from the outside to enter information into the published database,” Kawasumi says. Furthermore, the Kyoto Memory Map Project was launched, and memories of places and periods reflected in old photographs and maps are being collected and released as well. 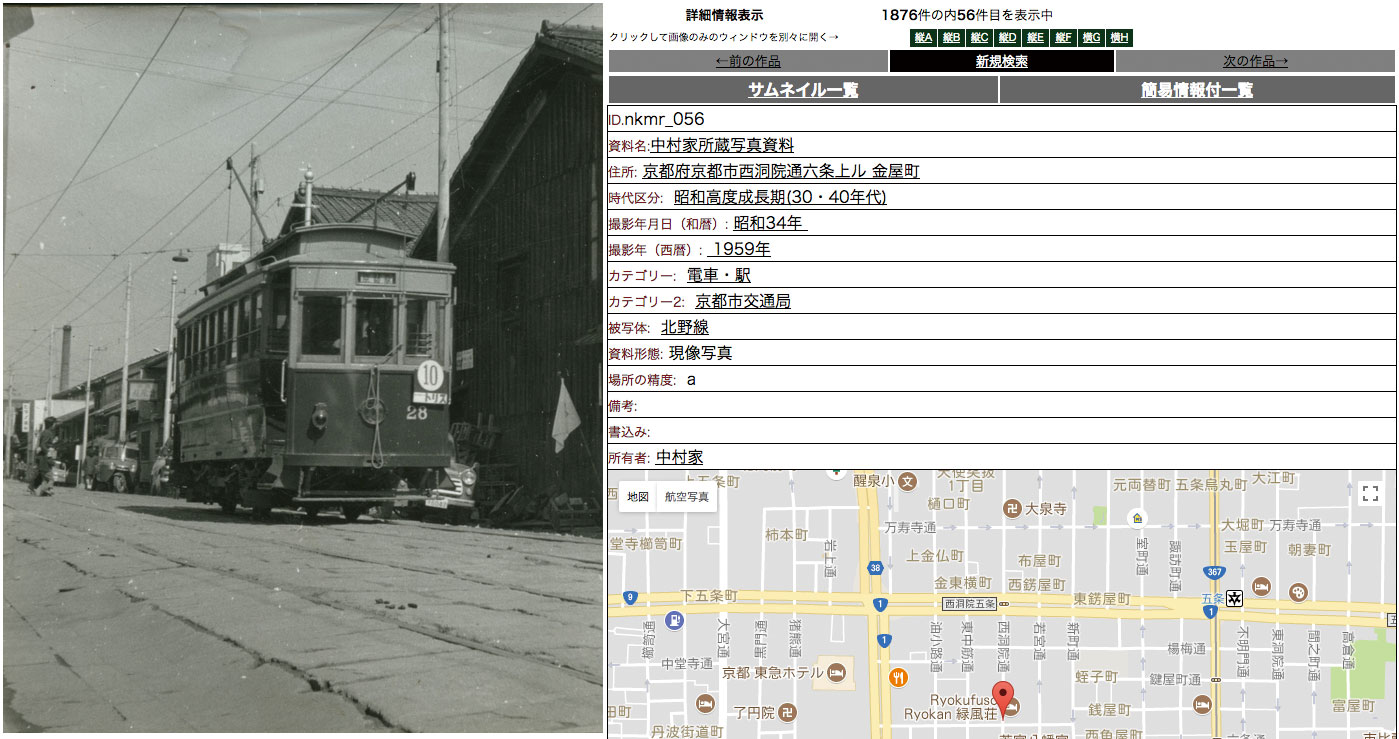 Photo database of railway and buses in Kyoto 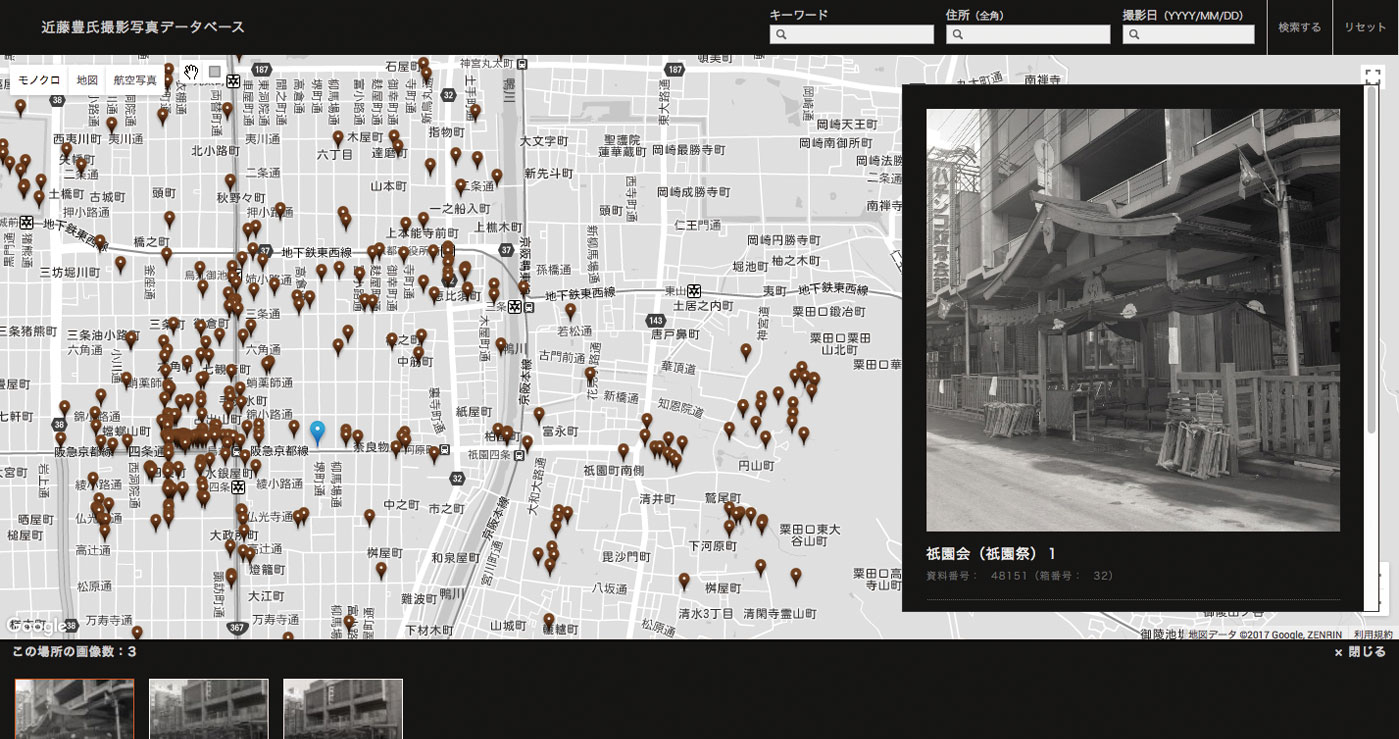 Recently, Yano and others are also moving forward in the archiving of about 1,000 items as part of the same intangible content as memories. Included in these items are folding screens and hanging scrolls, tools used in seasonal and annual events, and daily necessities, which are all stored in the Nagae Family Residence, a Kyo-machiya designated as a cultural asset of Kyoto City. He revealed his intentions by saying “I would like to record the way of dwelling and living through Machiyas and collected items.” “We believe that the understanding of Kyoto will be further deepened by accumulating diverse information through such a space and by its analysis and interpretations.”

It must surely be fun to be able to experience Kyoto in each era across time and space, just like a time machine, with a three-dimensional digital map, representing a multifaceted Kyoto with picture maps, pictures, culture, and memories. 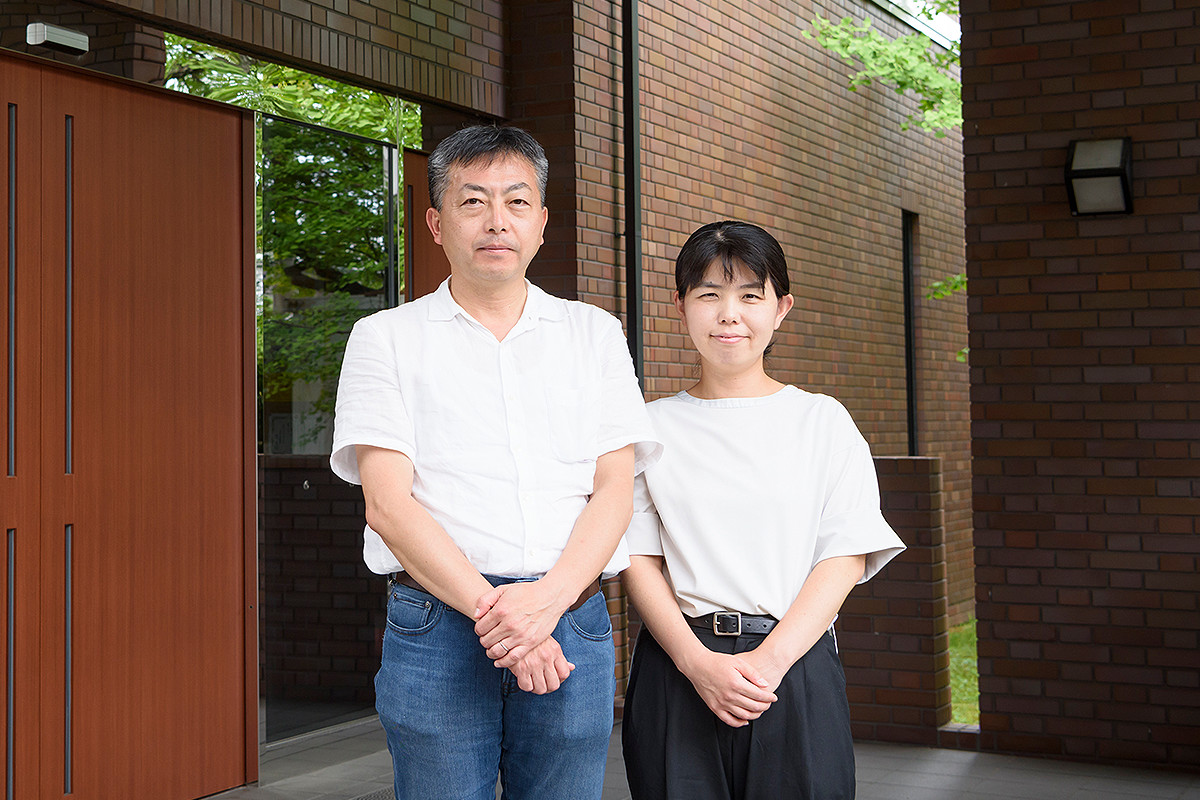