Robotics and Artificial Intelligence (AI) are research fields currently attracting a great deal of attention. Sadao Kawamura, professor of the College of Science and Engineering, who also serves as the director of the Robotics Research Center, and Tadahiro Taniguchi, professor of the College of Information Science and Engineering, who addresses R&D for AI from new perspectives, held enthusiastic and open dialogues on robotics and AI research, along with the relationship between the two, into the future.

Increased focus on robotics and AI, based on technological innovation

To understand your research position, please introduce yourself.

Kawamura My background is in bioengineering. During my master’s, I changed specialization to mechanical engineering and began the study of robots. Since 1987, when I began teaching at Ritsumeikan University, I have been involved in the development of robots by combining mechanical and control technologies. The development of underwater robots is one example of this. Recently, I am also working on a study of soft robotics making use of soft materials.

Taniguchi In contrast to Dr. Kawamura, I majored in the mechanical engineering first. I obtained a doctoral degree of engineering and then moved on to information science. The second AI boom of the 1980s had come and gone before the moment, with the limits of AI being pointed out as per a computer’s processing capabilities. In response to this, our research community gave more attention to the importance of the “body.” Human beings build cognition based on physical experience and communication with people around them and their relationships in society in a bottom-up manner. To overcome the limits of the then-existing AI, we thought it was necessary to have AI acquire languages and concepts using the same process as human cognitive development. We thus defined a robot as a computer that has a “body” interacting with external forces, and identified the new approach of “Symbol Emergence in Robotics” and carried out studies based on this.

More than 30 years have passed since the second AI boom. It is now said that we are being in a robot boom and that a third AI boom has already arrived. Why are robots and AI attracting so much attention again?

Kawamura One of the main reasons for this robot boom is the development of technology. For example, with element technologies such as sensors, actuators, and computers constituting robots, the technologies to actually integrate them have drastically evolved. In addition, there are increasing social needs. With a decrease in working populations due to declining birthrates and aging populations, especially in advanced countries, and accelerated reshoring of manufacturing, it is quite apparent that sooner or later, the manufacturing industry will be unable to keep pace without automation using robots. As illustrated by the market expansion detailed in the New Robot Strategy by the Ministry of Economy, Trade and Industry, robot development is now an important challenge that clearly needs to be embarked on all over Japan.

Taniguchi This current, third AI boom is being driven by deep learning and other machine learning technologies. One of the contributors of this is, as is the case with the robot boom, the evolution of element technology. In brief, it all boils down to increased computer processing speed and capacities, plus the large volumes of data that can be generated, accessed, and shared via the prevalence of the Internet. This is obvious, as AI mega companies are represented by, for example, Google, Microsoft, and Facebook. Unfortunately, Japan is currently being outdone by these companies, in reality. We must first catch up with these forerunners and create innovative AI in view of what’s coming “next.”

As with the notion of automobile robotization, robots of diverse shapes and functions beyond the imagination of the general public have appeared one after the other.

Kawamura I have had some misgivings about the high level of ambiguity in the definition of “robots” for a long period of time. The shapes and functions of a robot must be determined by the robot’s purpose, and assuming without a reason that “robots should be like this” may hinder robot development. For example, if “robots should be humanoids,” we need to add parts and components unnecessary for essential functions to make a “cleaning robot” a humanoid. This would become unfeasible in terms of both engineering and cost.

The soft robots that you (Dr. Kawamura) are studying are turning the popular concepts of robots upside down. Am I correct to assume this?

Kawamura Most robots playing a role in society now have a rigid body made of heavy metallic materials. On the contrary, I am trying to create “soft” robots using polymer materials such as plastics and rubber, in place of these metals. By using soft materials, weight and cost reductions become a possibility. Furthermore, not only is the material soft but we can also realize flexible and smooth actions, like a human, thereby expanding application potential to a large degree. That said, changing materials is a lot easier said than done. As most robot dynamics and control theories conventionally based on metals cannot be applied, we need to build theories for soft robotics from scratch. I believe it is a university’s role to assume the responsibility to build and develop theories that cannot be carried out by a private organization.

Taniguchi Soft robotics is heavily related to the development of AI technology in the future. AI prior to the third AI boom was in fact “hard” AI that could learn through uniform methods. On the other hand, machine learning, which we are currently focusing on, can be referred to as “soft software” that can acquire knowledge from variety of things.

For robots and AI, is the path of evolution to become even closer to human beings?

Taniguchi I am targeting AI that acquires knowledge via the same process as a human baby learning to understand its environment in a bottom-up manner. “Symbol Emergence in Robotics” is in fact the reverse engineering of human intelligence. Soft robotics can be understood in the same context. What humans are today is a result of adapting to the Earth’s environment through evolution by natural selection. Considering the fact that almost all organisms on Earth, in particular, human beings, have soft forms, it can be said that soft robots stand to reason. 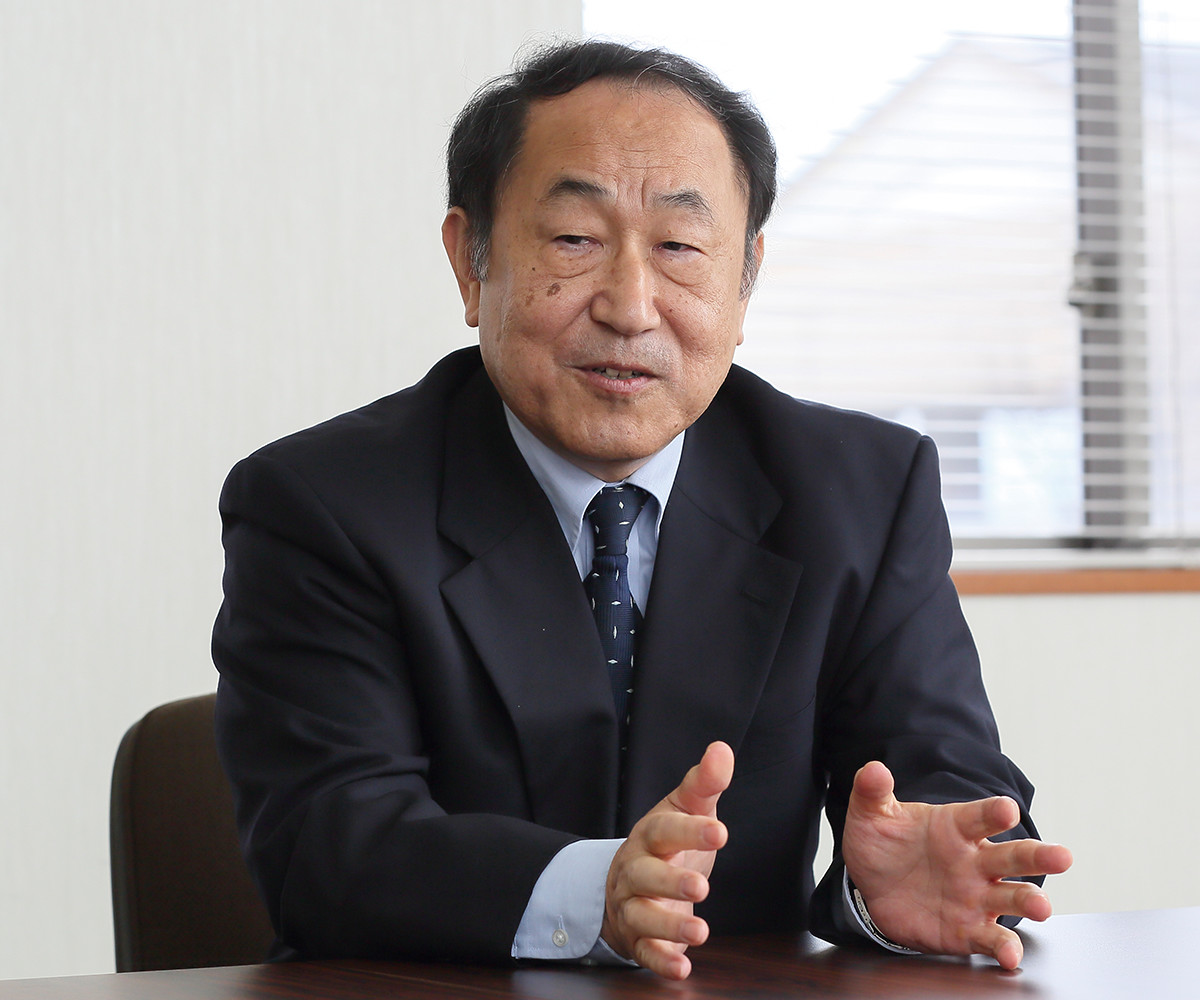 Born in 1956. Graduated from Department of Biological Engineering, Faculty of Engineering Science, Osaka University in 1981 and completed the Mechanical Engineering Doctoral Course, Division of Engineering Science, Graduate School of the same university (Doctor of Engineering) in 1986. Served as an assistant at Osaka University in the same year, assistant professor of the Department of Mechanical Engineering, College of Science and Engineering, Ritsumeikan University in 1987, and later as professor. In 1996, along with the establishment of the Department of Robotics, appointed professor of said department. Between April 2003 and December 2006, appointed vice president of Ritsumeikan University. Associate member of the Science Council of Japan from 2006 up to the present date. President of the Robotics Society of Japan between 2011 and 2013. Chairman of the Robotics Subcommittee of the Science Council of Japan since 2016. Engaged in the Robot Revolution Initiative as a councilor from 2015 up to the current date. 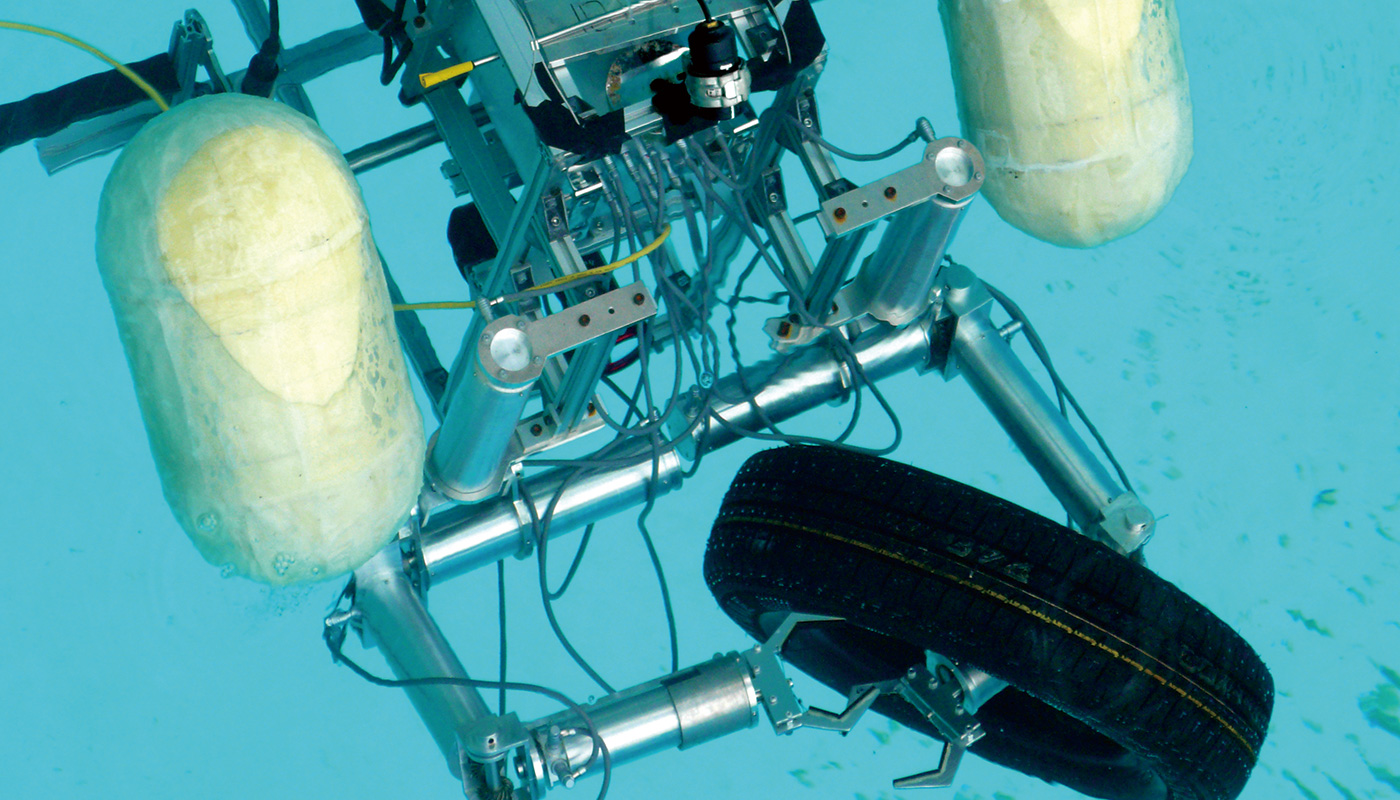 Taniguchi Excellent machine learning cannot be considered useful on its own in the real-world environment. It needs to function with hardware or robots cooperatively, and also with a synergetic effect. To create a robot that can properly function in a human environment, software that can flexibly respond to the evolution of hardware is required. Assuming that AI development will be carried out at companies closer to commercialization, it will become more and more important to integrate robotic hardware with AI software, while working on technological developments.

Kawamura I completely agree. In my research, software control and hardware mechanisms are both necessary for the design of a robot that functions properly. We need system integration technology to integrate both mechanisms and control according to the purpose at hand. In addition, it is necessary to establish a theory as a foundation, not only as a realization, and this is a role that should be borne by universities.

Universities are also expected to develop system integrator personnel that can link hardware with software, across the barriers of mechanical engineering and information science.

Kawamura Indeed, this is a difficult problem. In 1996, Ritsumeikan University established the Department of Robotics at the College of Science and Engineering for the nurturing of system integrators. Even now, we are engaged in endless effort involving substantial trial & error toward the development of human resources that can connect software to hardware.

Taniguchi It is a matter of urgency to develop talented human resources that can integrate multiple knowledge from different fields of studies. However, there are some misgivings that we might end up bringing up human resources with zero specializations and that have studied multiple academic fields albeit incompletely. I believe they should first master a high level of specialization that will serve as a foundation and then enter other fields during their doctorial course. Ritsumeikan University entertains a leading number of cooperative projects between industrial enterprises and universities throughout Japan, producing many talented human resources ready and able to work in the industry. These very connections with the industrial world should serve as a strength for Ritsumeikan University in developing system integrators.

Kawamura Dr. Taniguchi and I both have a career that spans different majors. However, specialist fields are now becoming increasingly fractionalized, with the number of people studying different fields decreasing all the time. It would be ideal if such education could be put into practice in doctoral courses. 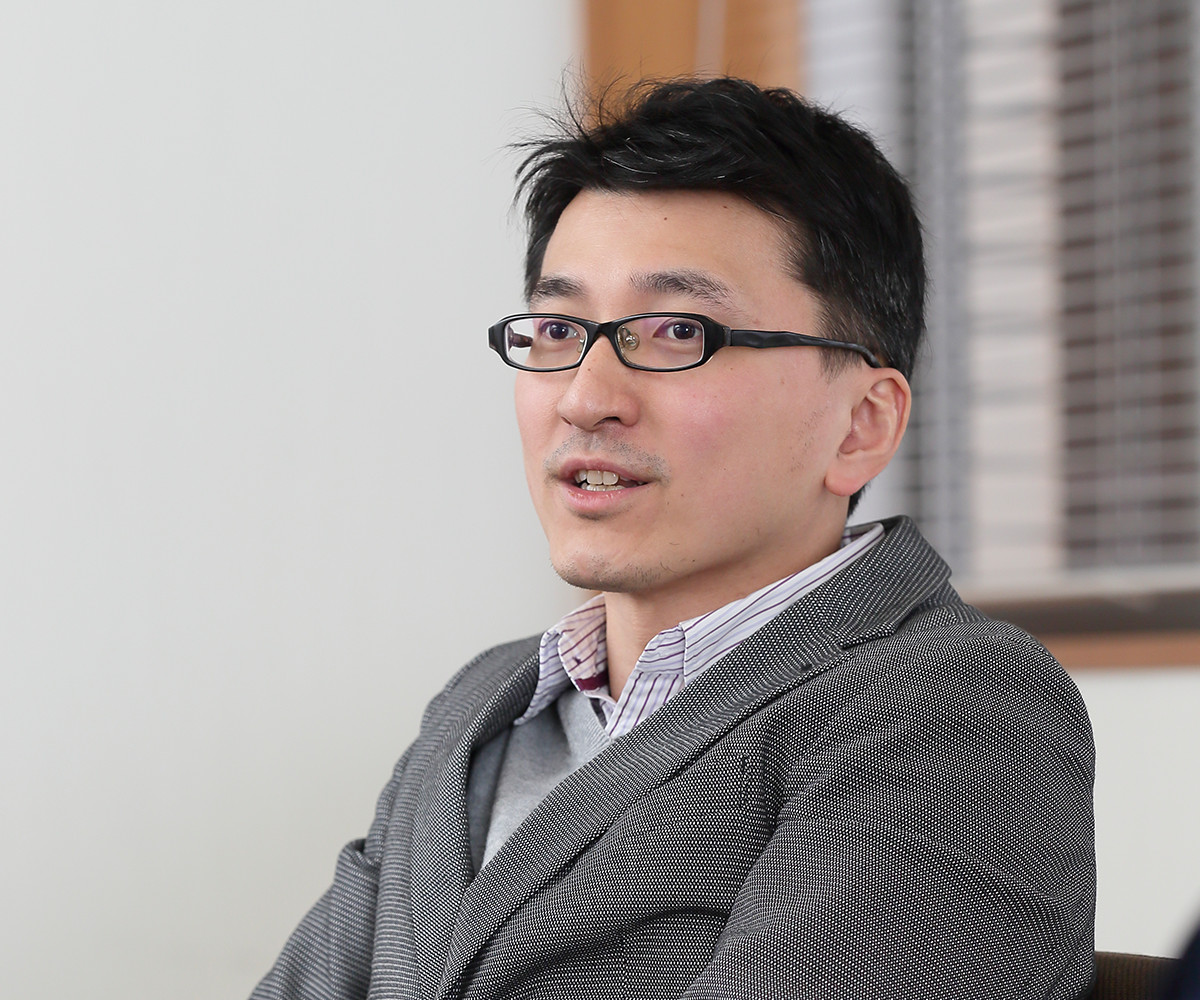 Born in Kyoto in 1978. Completed a doctoral course at the Graduate School of Engineering, Kyoto University (Doctor of Engineering, Kyoto University) in 2006. After serving as an assistant professor and an associate professor at the College of Information Science and Engineering, Ritsumeikan University, assumed current position in 2017. Visiting associate professor at the Imperial College London between 2015 and 2016. Visiting general chief scientist at Panasonic engaged in R&D involving AI since 2017 (first cross-appointment case from a university to a corporation). Also known as the originator of Bibliobattle. Published materials include Constructive Approach towards Symbol Emergence System (NTT Publishing), Symbol Emergence in Robotics (Kodansha), and other titles. 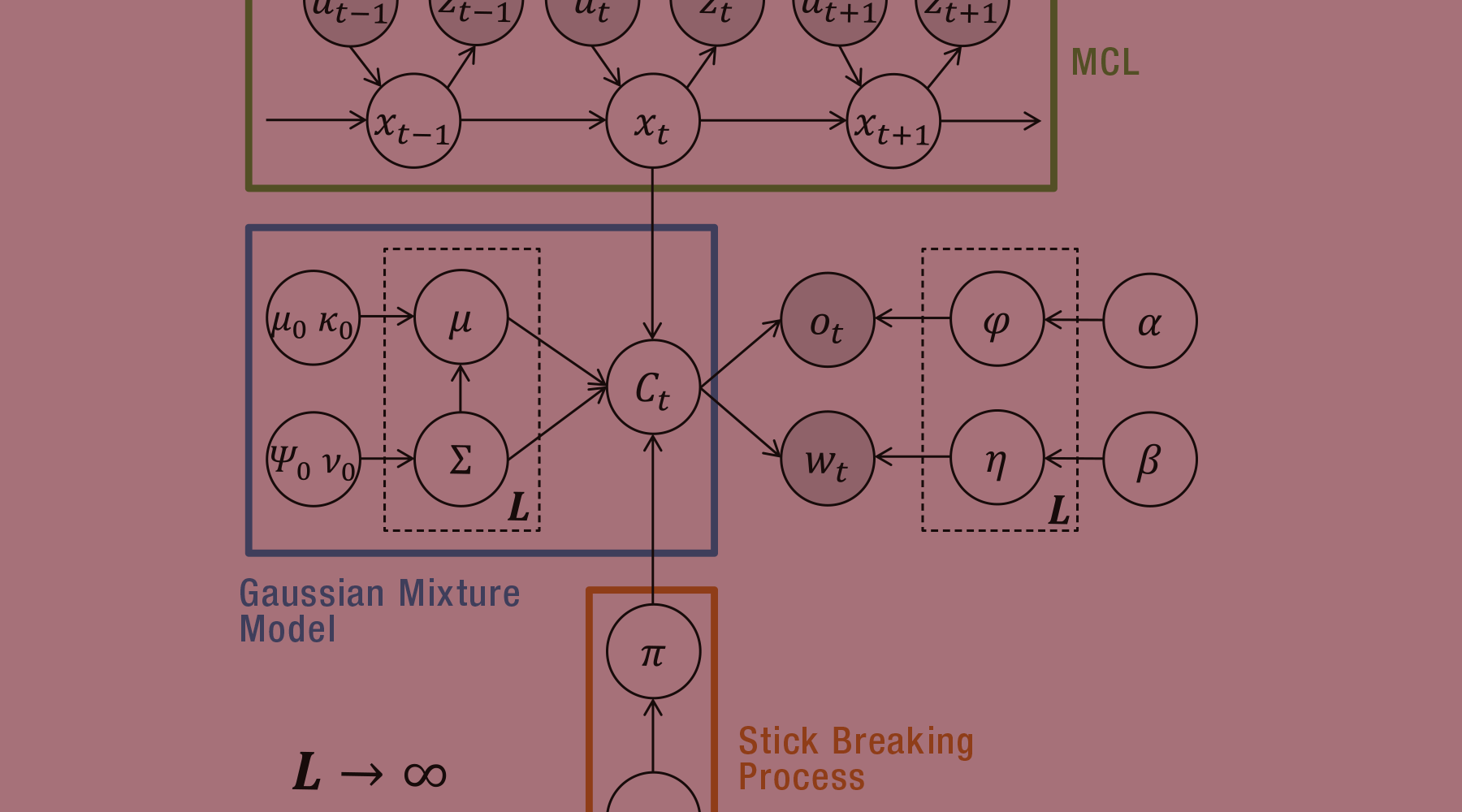 Creation of next-generation robots and AI through interdisciplinary collaboration

Both of you are engaged in the forming of Research Core, an interdisciplinary research project adopted by the Ritsumeikan Global Innovation Research Organization (R-GIRO). Please provide your outlook regarding the future of robots and AI research, including interdisciplinary collaboration.

Taniguchi Going forward, from the viewpoint of “Symbol Emergence in Robotics,” under a focus on the dynamism leading to human language acquisition and evolution, we will concentrate on AI studies and the social implementation of robots as an outcome. To understand the dynamism of human intelligence, we need basic research via interdisciplinary fusion in the truest sense. Ultimately, we aim to develop our R-GIRO research project as the core.

Kawamura I am also working on the development of soft robotics using advanced materials. Without a need to emphasize the importance of system integration, we cannot separate software from hardware in terms of robot development. In the development of soft robots, assistance from the “soft software” that Dr. Taniguchi mentioned will be essential. As for the challenges going forward, collaboration between the mechanical and information fields is sure to become more and more important.