The integration of control and mechanisms is essential for properly operating robots underwater.

Lake Biwa is the largest lake in Japan. It is a very old lake, the shape of which has remained unchanged for about four million years. It has a rare presence in the world in that it has maintained a rich ecosystem up to the present day. Underwater robots now play active roles in its environmental conservation, and they also conduct investigations. COCO, developed by Sadao Kawamura and others, is an underwater robot capable of grabbing objects underwater, while using two arms. It has a small and lightweight body of 55 kg and is capable of diving to a depth of 50 meters, and it can pick up litter, capture video via an attached camera, and take measurements via an accelerometer, all at the same time. It has even been able to salvage old tires from the bottom of the lake.

Operating a robot on land is totally different than operating one in water, where it is affected by water pressure, buoyancy, and currents. With additional components such as highly flexible robotic arms, control becomes even more complicated. It is extremely difficult to move robotic arms on a floating underwater robot into proper positions, and in addition, when holding an object underwater without any foot-holding, the robot can lose balance due to the object’s weight, and both the robot and the object can fall over. Kawamura developed an unprecedented and independent mechanism to shift the center of buoyancy as a means to solve such issues. This is a mechanism with two urethane foam float blocks and a screw that controls pitch and roll angles while maintaining the attitude of the robot body, successfully positioning this attitude toward underwater objects.

Kawamura’s strength lies in his high skill regarding computer control technology and mechanical system development. “A robot is a synthesis of sensors, actuators, computers, and other things, to form a system,” according to Kawamura. “Reliable performance cannot be expected without thinking from the viewpoint of system integration.” The effects of an aquatic environment are still too unpredictable, while computer simulations are lacking, making the integration of mechanisms and control difficult. By overcoming this, however, Kawamura has realized unprecedented small-sized and high-performance underwater robots in quick succession.

“We attach importance to not only the performance of an underwater robot but also to ease in operation.” If a robot can only be used by trained experts, whatever high-performance an underwater robot has would be a real waste of a valuable asset. Kawamura designs systems taking handling into consideration right from the start, so that the operation of robotic arms with a complicated control mechanism can be controlled via just a single joystick.

ARTEMI, an evolution of COCO, is lighter and weighs 30 kg. It can move much more quickly than COCO, and can grip objects and perform assembly with its arms at the front. By communicating the underwater situation via a camera and a 150-meter cable to the operator on the surface, complicated operations such as sticking long, narrow pipes into underwater silt become possible. 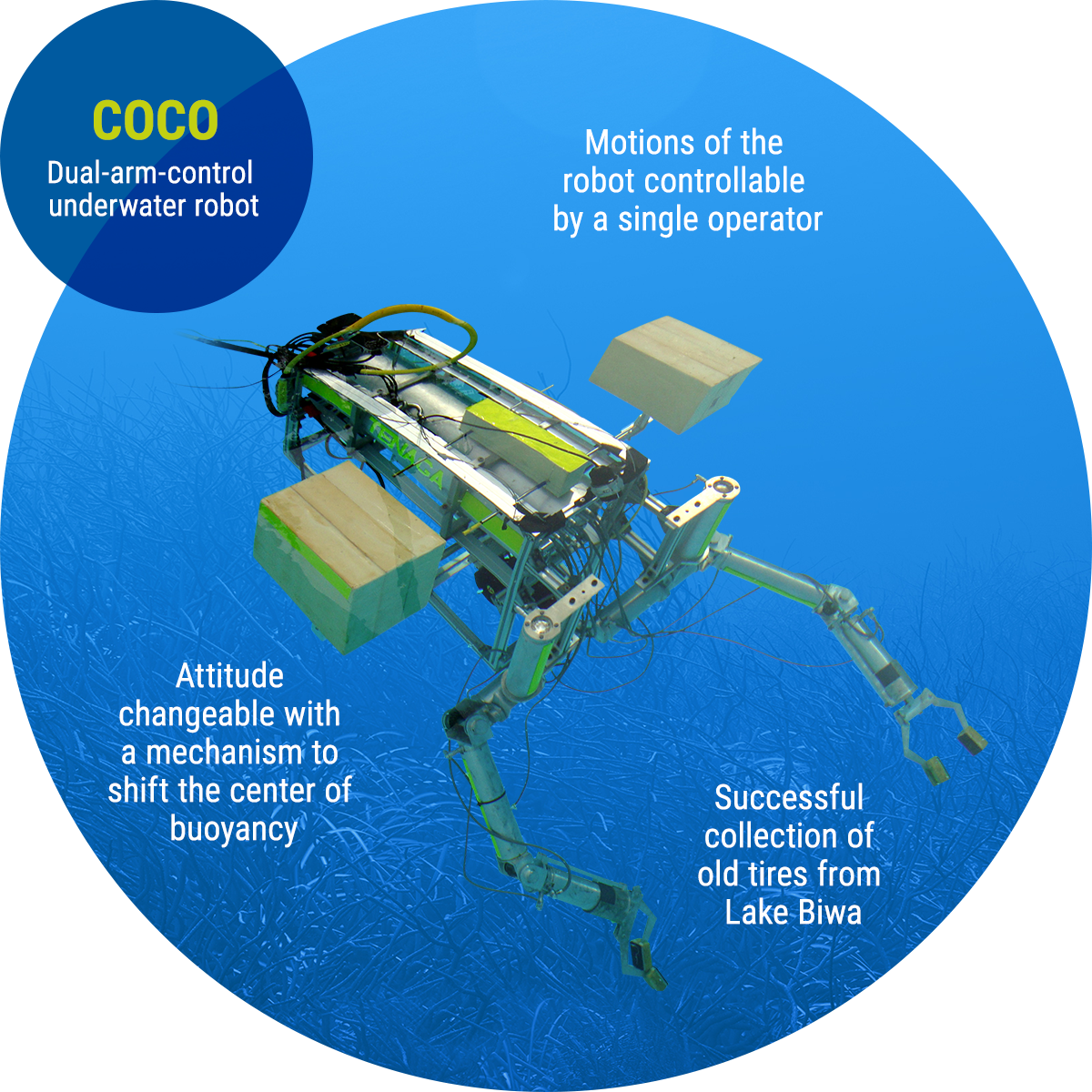 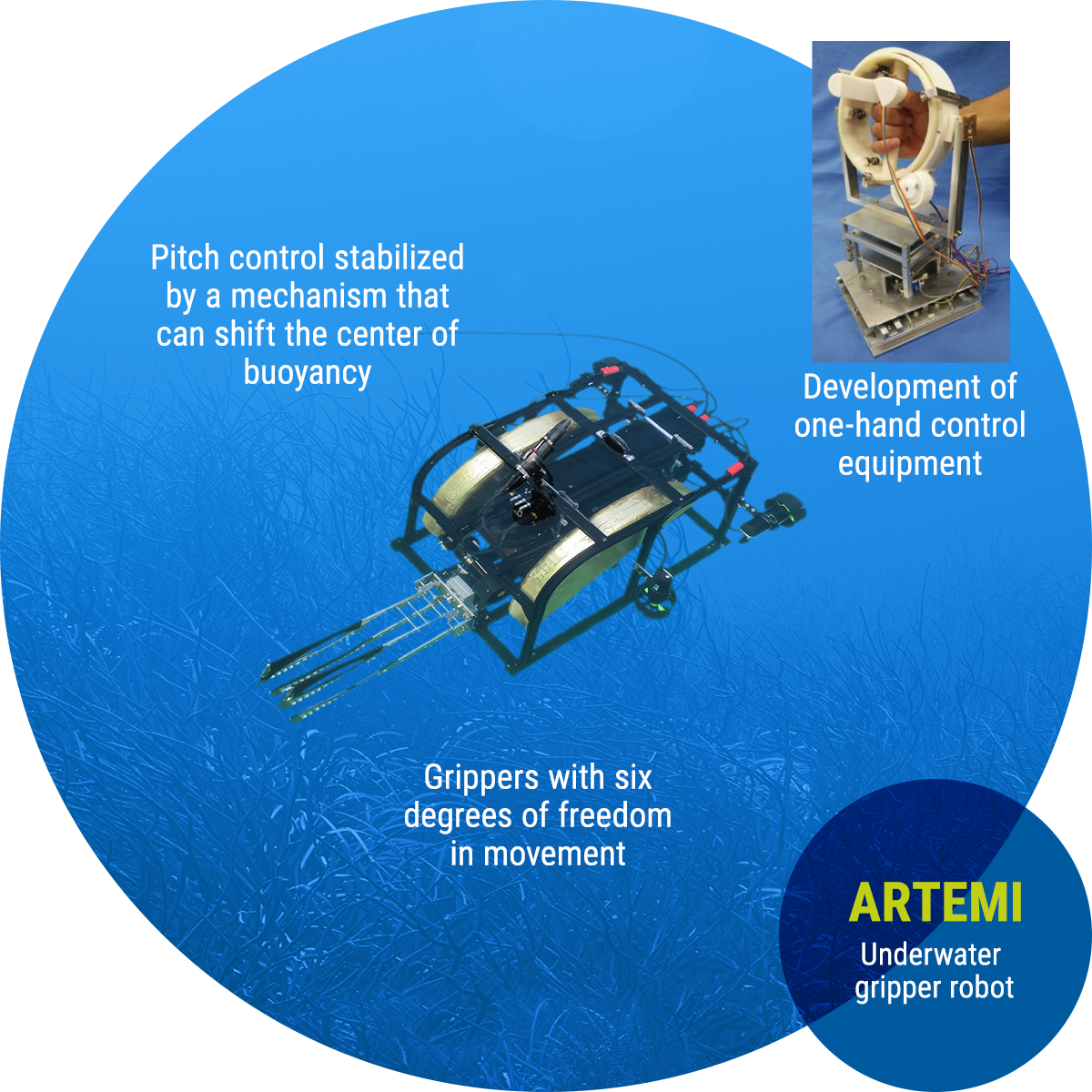 Prior to these robots, most underwater robots that could be handled were large-scale robots used in deep-sea explorations. Kawamura says, “Robots that can descend more than 3,000 meters below sea level weigh in the order of hundreds of kilograms or tons. Development would cost tens of billions of yen, with just one exploration costing anything from tens to hundreds of millions of yen. With this being the case, it was not possible to use robots for environmental conservation or for surveys, without great expense.”

Kawamura is pursuing downsizing, weight reductions, and usability, as the number of underwater robots with such features is limited compared to actual need. “As such development is difficult, and with a lack of researchers available, neither technological nor human resource development could attain an advancement,” he says, while showing his determination to take on such a difficult challenge. “I want to break up this vicious cycle.”

In addition to robots that are useful for environmental conservation such as COCO and ARTEMI, Kawamura is working hard on the development of a robot for the investigation of Lake Biwa’s environment and also for archaeological surveys. MITSURUGI is an underwater robot that can collect samples of silt accumulated over the course of hundreds of years by sticking a thin, long cylinder of about one meter into the bottom of the lake. To minimize the effect on streams and to efficiently change directions and perform movements, he made contrivances to the variable shape mechanisms and thruster (propeller) arrangements.

MIKAN was developed to conduct a survey of the Tsuzura Ozaki underwater site in Lake Biwa. MIKAN can dive 70 meters below the water level, where GPS signals cannot reach, and can search for earthenware at the bottom using a high-vision camera that can look for various objects, using 3D and ultrasonic signals. To enable the robot to move through areas with heavy current, it has eight thrusters and is equipped with a function to blow away surface silt using a water jet so that any earthenware buried under the silt is not damaged.
The underwater robots developed by Kawamura not only play a part in the environmental conservation activities of Lake Biwa but also support historical discoveries that can clarify geological and human history. 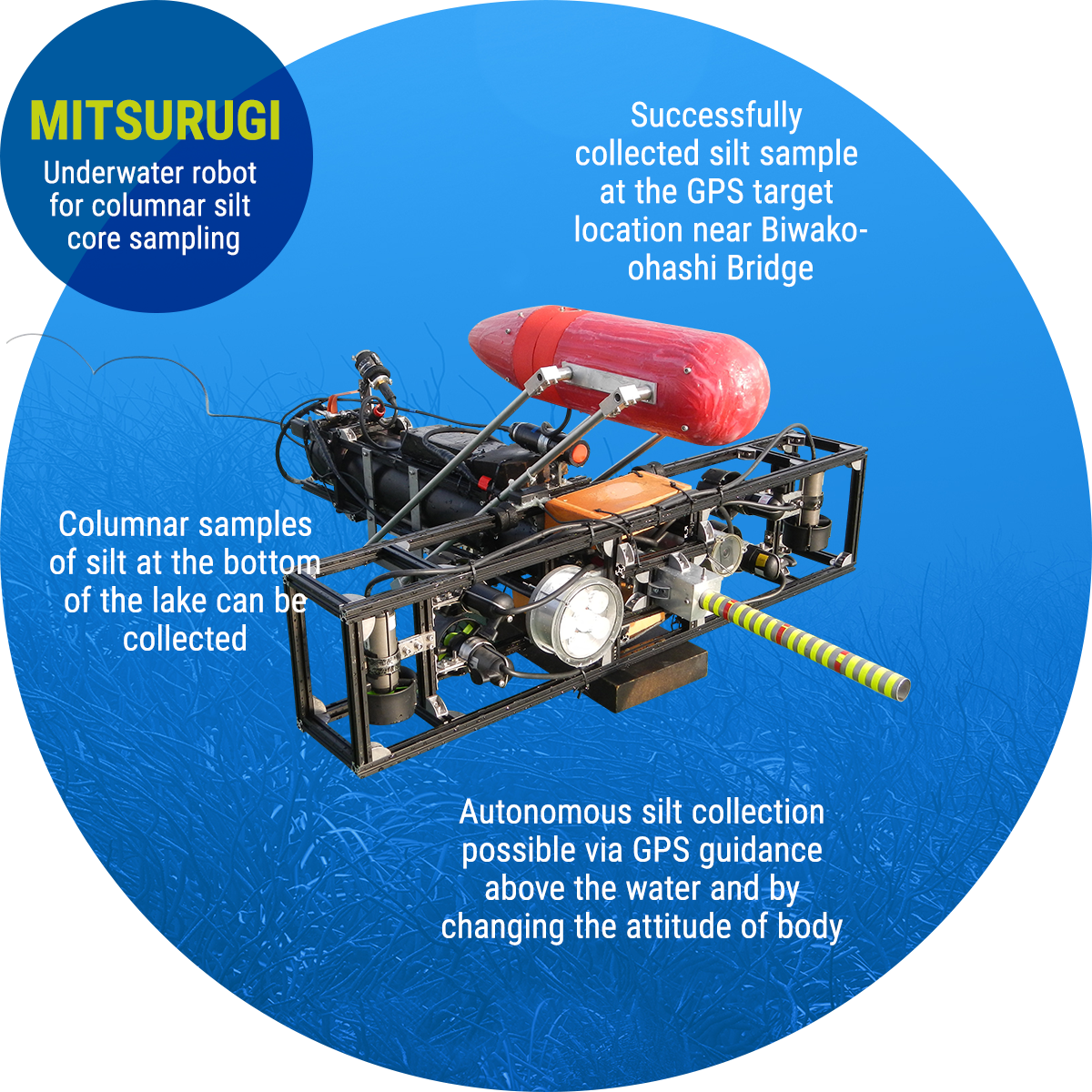 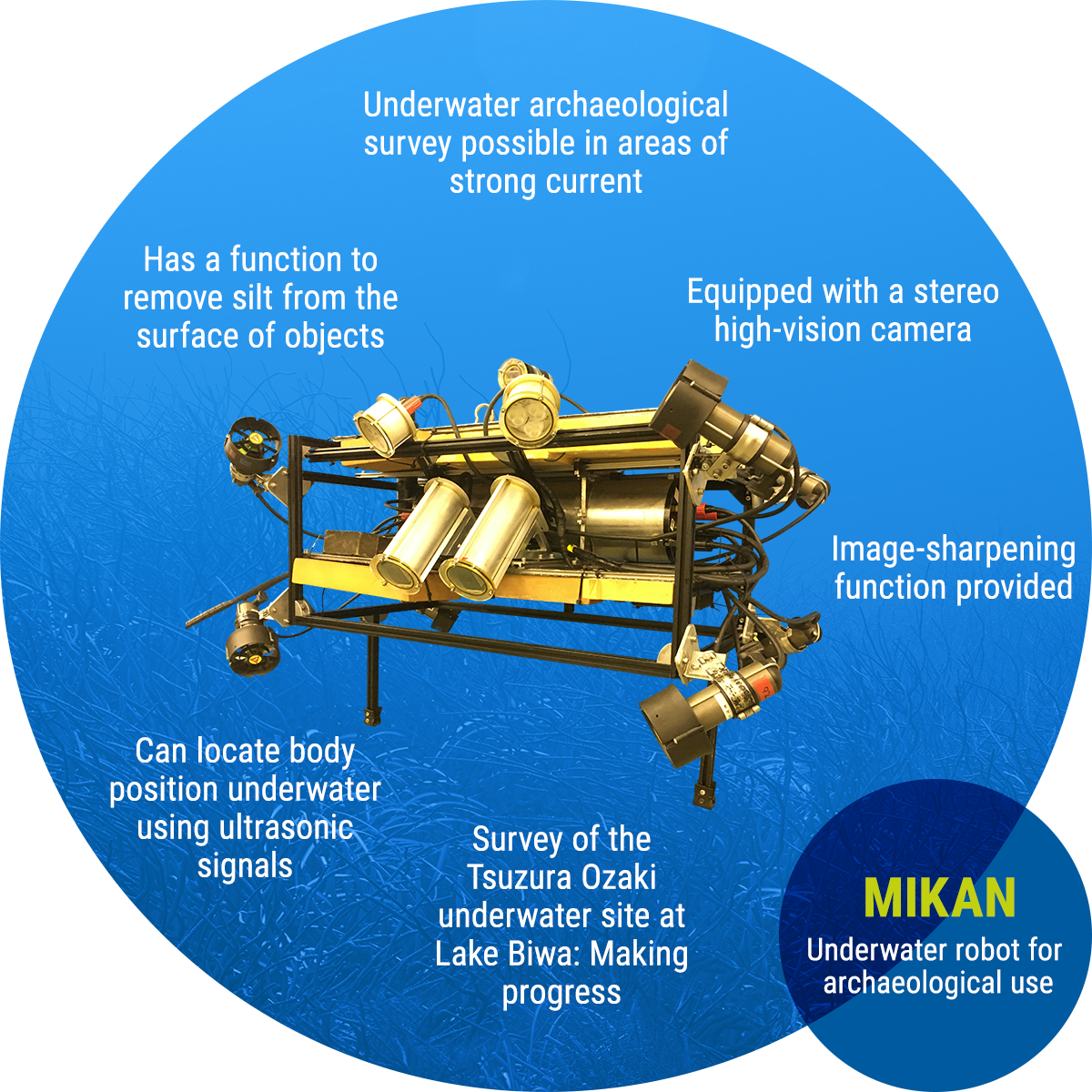 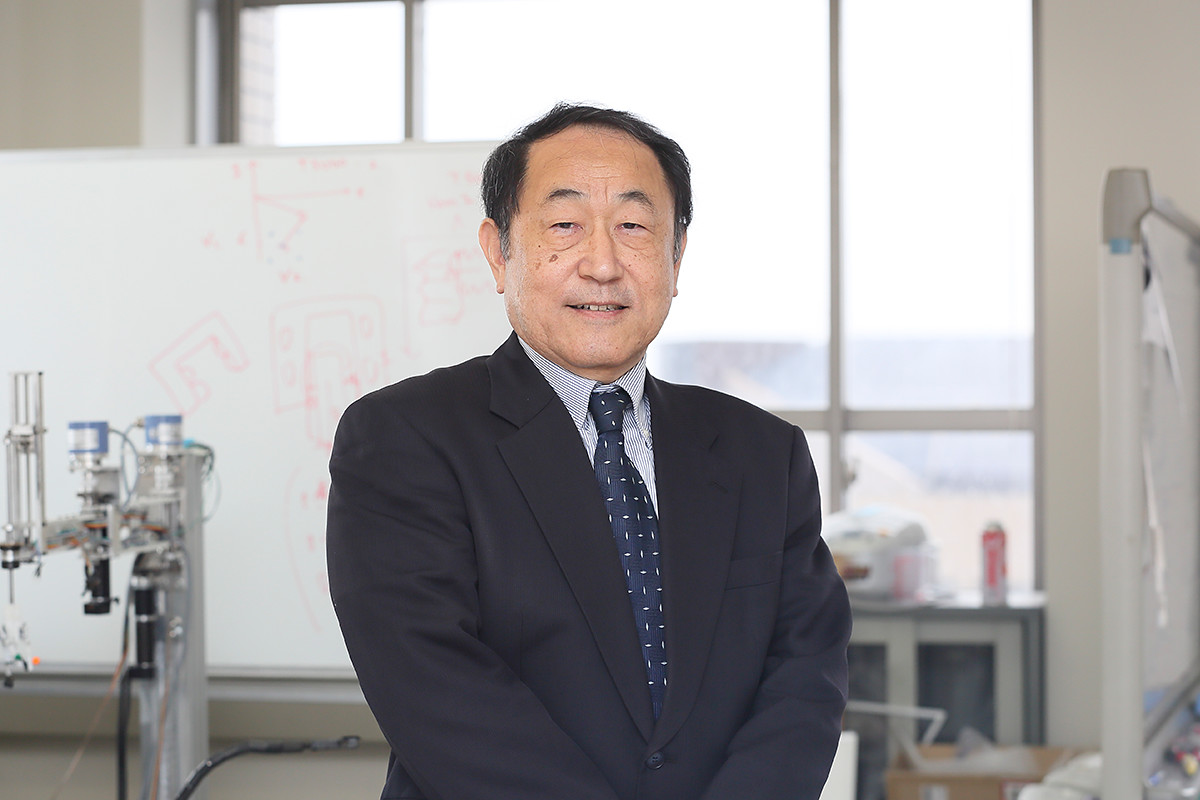