Robots made of soft materials will be able to realize unprecedented functions.

Conventionally, robots have rigid metallic bodies, moving awkwardly and not so smoothly. The development of soft robots turns this popular image of robots upside down, and soft robots are now making progress at an alarming pace.
One of the pioneers of soft robotics studies, Shinichi Hirai, has explored robotic functions different from conventional robots, by actively using soft materials. He has especially focused on developing robots that can manipulate flexible materials, capable of holding soft and deformable objects. He assumes foodstuffs as objects to be held. The target is to use robots in packaging operations at food processing plants in the near future. “The number of bento [lunchboxes] sold at convenience stores each day is about two to three million sets in Japan, with all packing done manually by human hand at factories,” Hirai says, as an explanation as to why he is so devoted to this development. “On manufacturing floors, automation using robots has made substantial progress. However, robots cannot replace human workers regarding the performance of delicate tasks that require the adjustment of force for food materials of different shapes, sizes, and softness, thus not being able to finally pack such food materials. At the same time, however, in an industry where a lack of human resources is a serious issue, demand for the automatic packaging of food has certainly grown.”

The first method that Hirai came up with was holding an object by surrounding it with an elastic thread and tightening it. This is a mechanism where an elastic thread is stretched around the ends of four poles resembling fingers, with an object placed inside the enclosure. Then, the fingers are closed to tighten the thread, thereby picking up the object. Pressure-sensitive conductive threads for which the electric potential changes when an object comes close or makes contact are employed as elastic threads. He came up with a contrivance where in response to the hardness of an object, the gripping force is adjusted so that it could be picked up while keeping deformation to a minimum.

As an extension of binding hands using elastic threads, Hirai and Zhongkui Wang, studying under Hirai, are developing flexible fingers driven by air pressure. The gripping section made of rubber and other soft materials has a shape with bellows-like indentations on one side. When air flows inside, the joint sections inflate and bend like fingers. Three of the flexible fingers are mounted onto a pneumatic control system to pick up various objects. 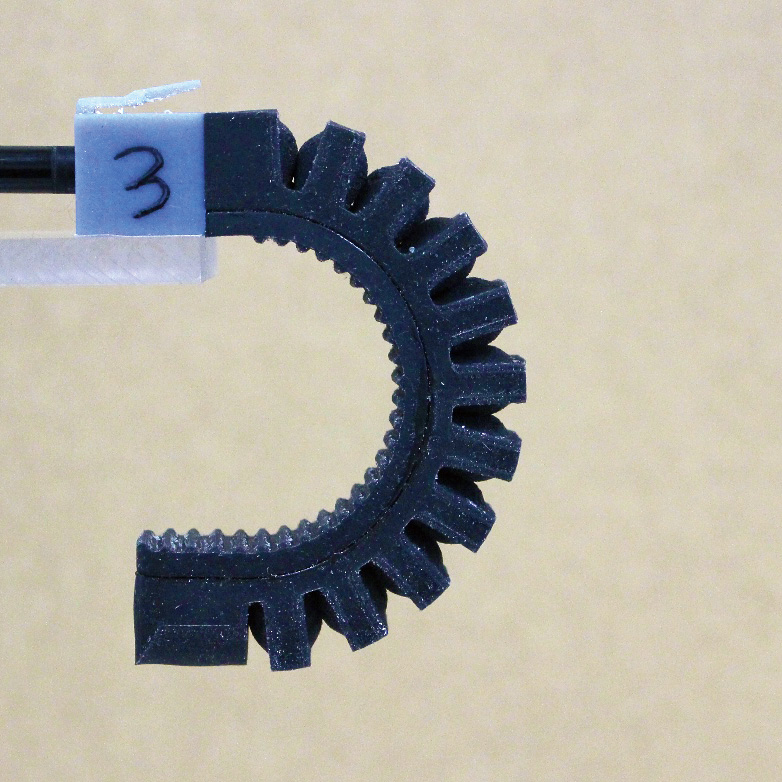 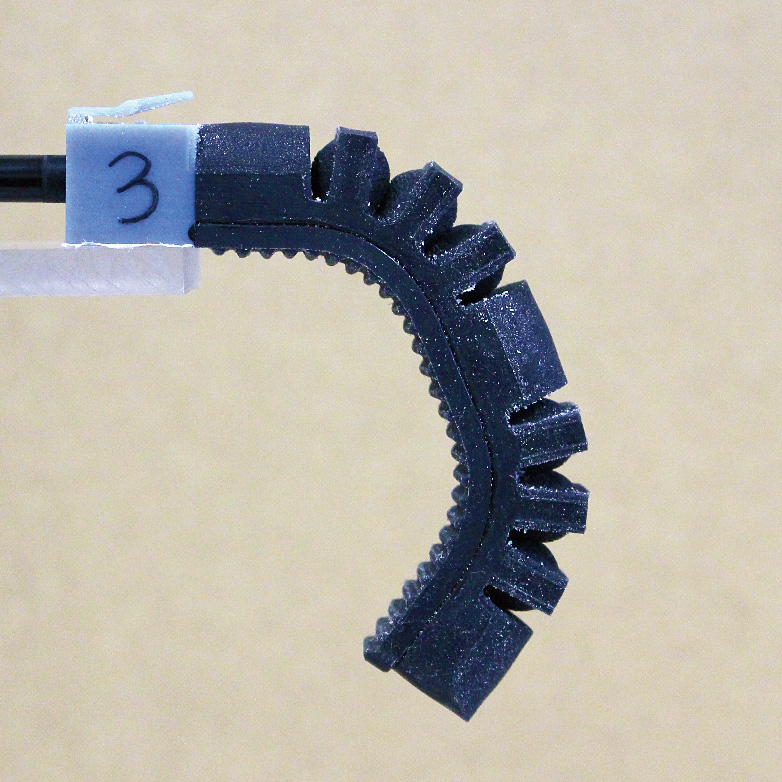 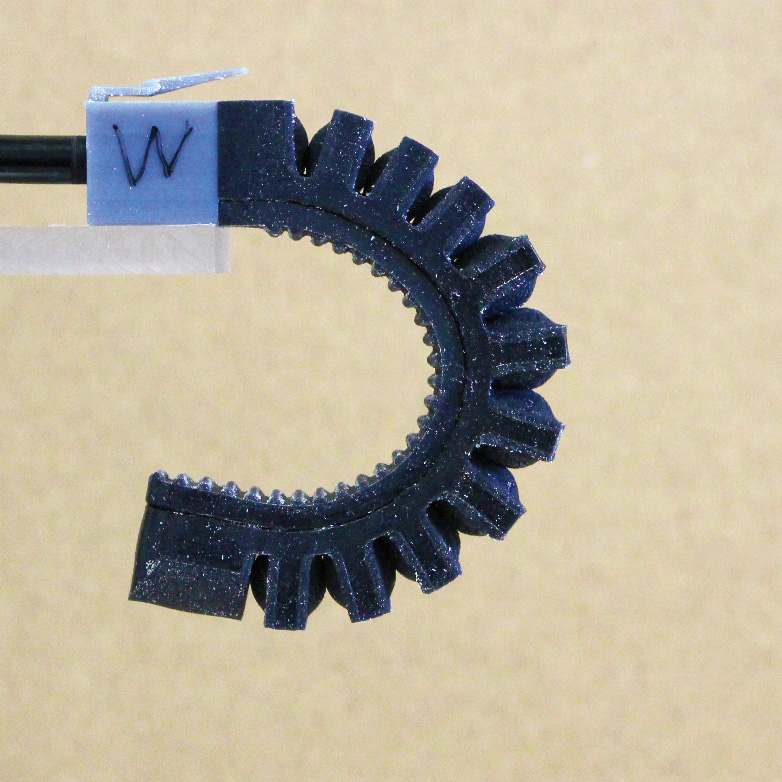 Thanks to the emergence of 3D printers, the production of robotic hands featuring a wide variety of designs has become possible. The shape of air chambers and material properties can control how these fingers bent.

Though the concept of this driving principle already existed, Hirai and Wang employed a 3D printer to fabricate the flexible fingers, as a means to enhance fabrication efficiency and motion reproducibility. “In conventional casting process, rubber material was manually poured into molds for casting. Therefore, the individual differences in elasticity of flexible fingers are significant. In addition, manual process induced deformation nonlinearity made finger control difficult. Instead, by using a 3D printer, we have been able to stably produce flexible fingers with nearly the same shape and elasticity,” according to Wang.

In addition, taking advantage of 3D printing technology, flexible fingers can now be made, using multiple materials with different properties. First, the foundation of the finger was laminated with rigid materials. Then, it was laminated with more flexible materials. In this way, flexible fingers were formed with multiple different materials, thereby enabling the fingers to hold differently shaped objects between them. “When we carried out a gripping test on food materials, we were able to lift objects of different shapes, forms, weights, and softness, such as fried chicken, an egg, a slice of grilled salmon, and even an empty can, without deforming or crushing any of them.”

The next challenge is to support the variation of food materials assuming that a packaging line at factory. The shapes and sizes of fried chicken are all different, and in addition, they may not be placed in the same position on the production line. “We need to sense these variations and link them with the motions of the robot’s hands and a control of gripping power. To achieve this goal, we are considering collaboration using technologies from other fields, such as image sensing, for example.”

“When I first created a robot by taking advantage of deformations such as shrinking or inflation, most people criticized soft robotics,” Hirai says in reflection. In 2014, after almost 20 years, Soft Robotics, a special magazine covering soft robotics, was launched in the U.S. Research into soft robotics is making steady progress all over the world. He joyously relates, “Looking at what nobody else has noticed and discovering new things before others is the most interesting aspect for me.” 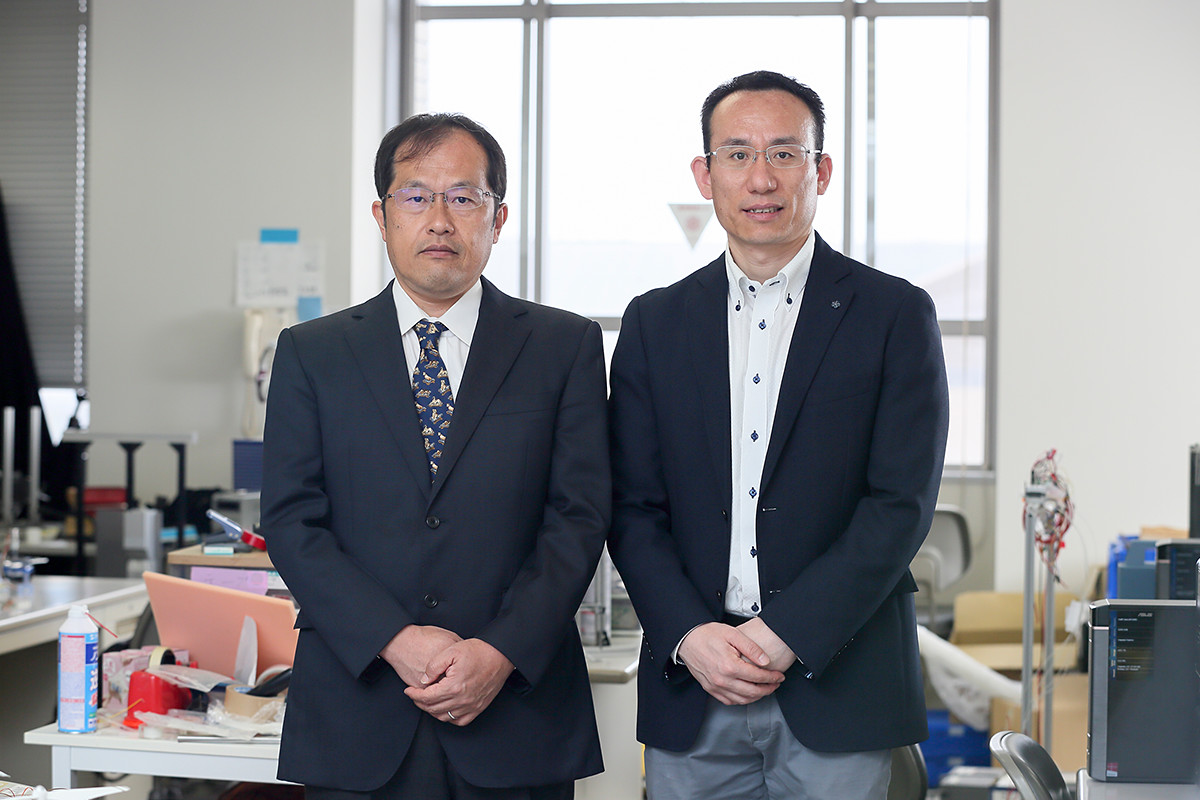