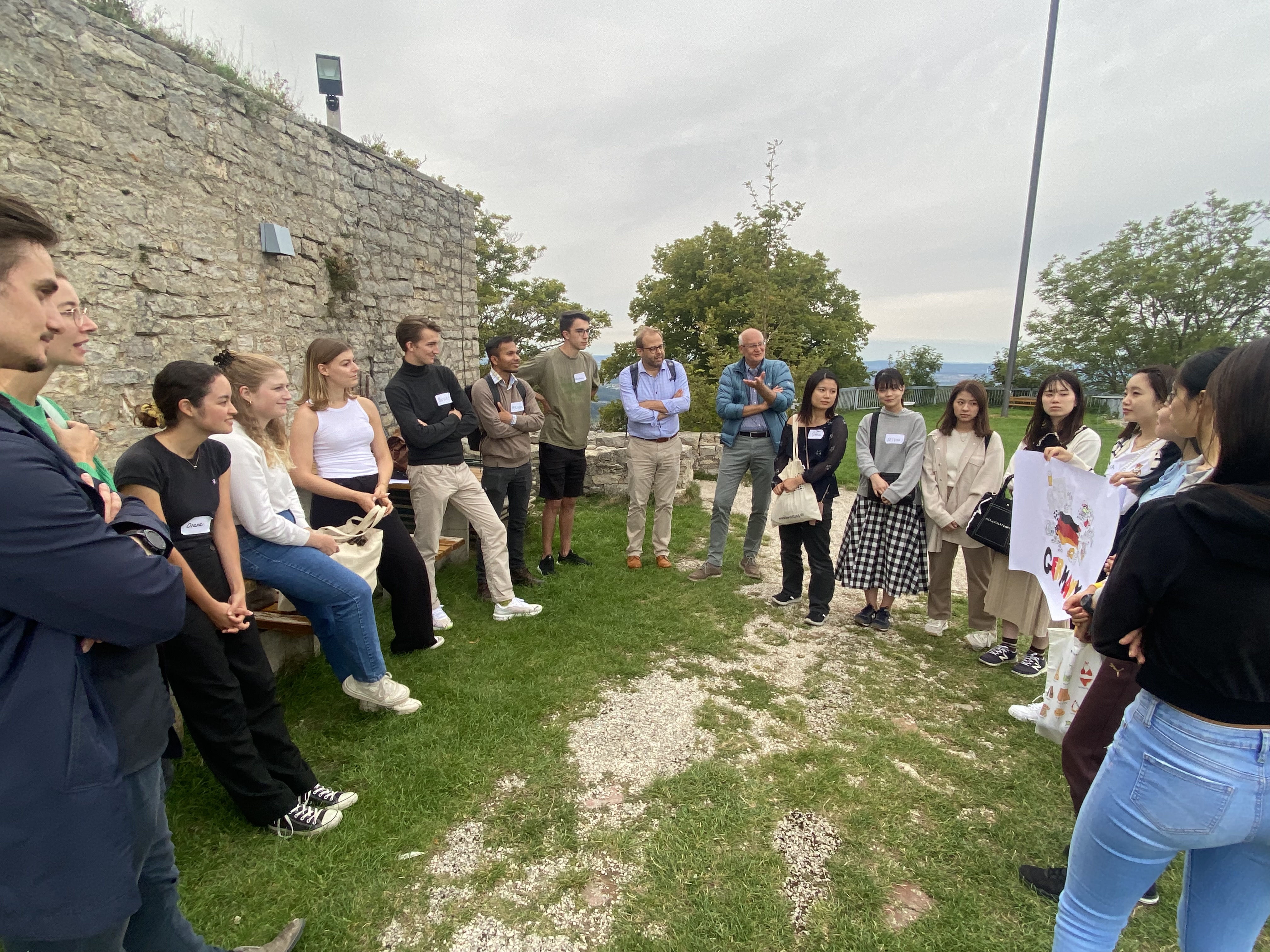 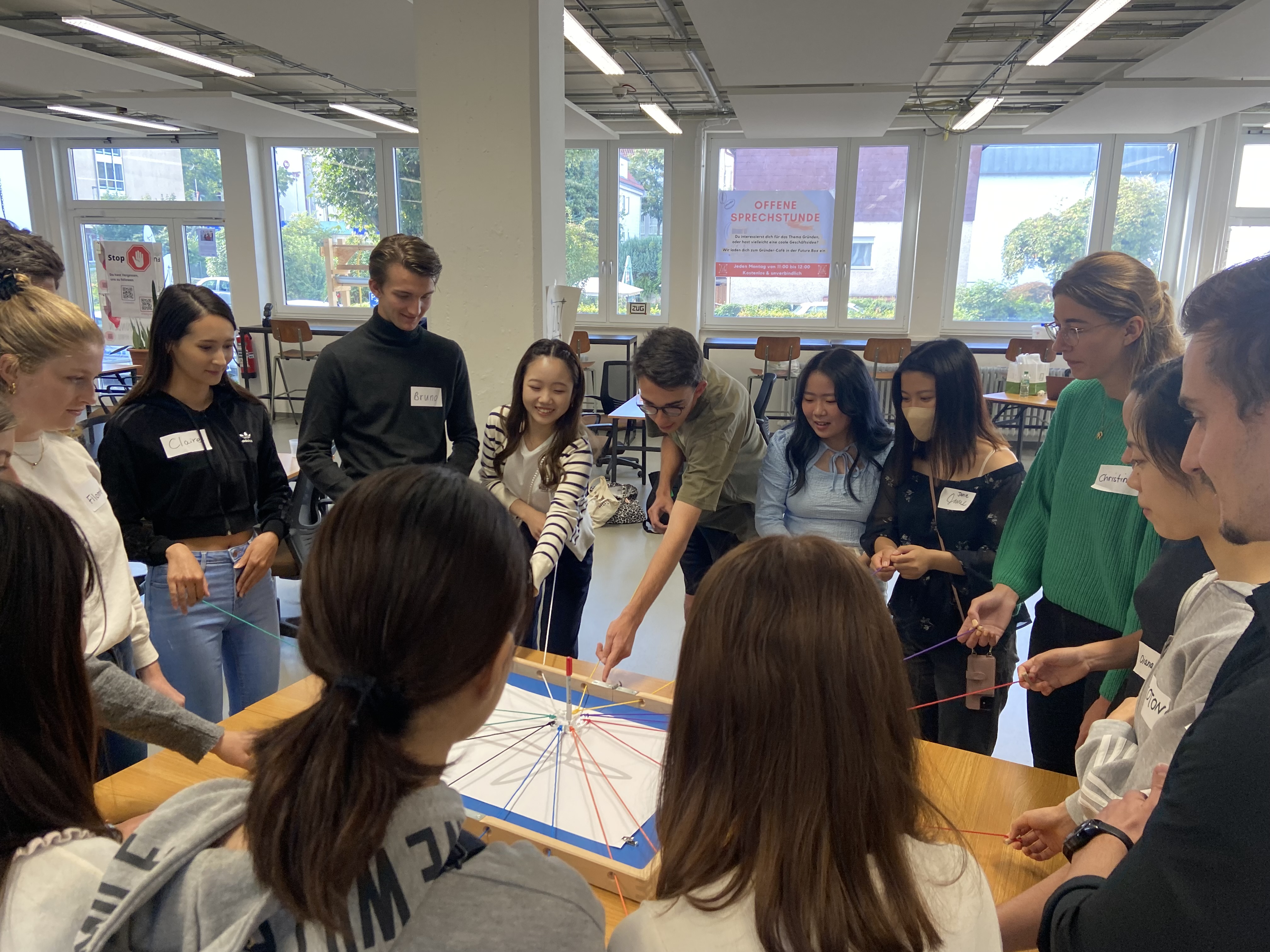 The various teams presented their research results at the end of the Summer School. (Photo: HfWUrilling)

Part of the Summer School was also an excursion to the Hohenneuffen. (Photo: HfWUrilling)

NÜRTINGEN. (hfwu). The topic could hardly be more topical: the transformation of the energy market and the growing importance of renewables. Both were the focus of the first german-Japanese Summer School at the University of Applied Sciences Nürtingen-Geislingen (HfWU). For the German and Japanese students, there was a lot more to learn and experience than just economic contexts.

Four students from the HfWU in Nürtingen, four from the University of Hohenheim, eight from the Ritsumeikan University in Kyoto. Different knowledge of energy markets, other energy markets and structures in the respective country and last but not least the different cultures. It was also an experiment to see if the students would come together to form a productive group at the first german-Japanese Summer School with these different starting positions. "We were surprised how quickly a relaxed atmosphere and a productive cooperation emerged," says HfWU Professor Dr. Carsten Herbes, looking back on the two-week project. "The chemistry was right," says Prof. Dr. Jörg Raupach-Sumiya from Ritsumeikan University.

The two energy market experts developed the concept for the "Sustainable Energy Futures" summer school together with HfWU employee Benedikt Rilling. The study program included the analysis of the various energy markets, actors and perspectives on renewable energies, the application of scientific methods and also the view of intercultural differences between the two countries.

What was new for the Japanese students was that municipal utilities and cooperatives also play an important role in the German energy market. Another central difference between the two countries is the market maturity, according to Carsten Herbes, i.e. how long the topic of renewable energies and associated products has been a general consumer issue at all. With their analysis of the websites of market players, the students were able to show how this is reflected in the presentations and in the information offered by the market players. In Germany, people have been familiar with the topic for longer and are comparatively well informed. Marketing and corresponding illustrations therefore tend to focus more on emotionality. In Japan, the focus is on more basic information and knowledge transfer. On the websites of Japanese companies, more facts and figures can be found. But cultural differences also play a role. Unlike in Germany, in Japan comics are a form of representation with which adults naturally identify. Accordingly, it is often found as a means of communication at Japanese energy companies, almost not at all at the German ones.

In addition to this research project, there was a lot more on the program, including a "Culture Rally", a workshop on intercultural management, a visit to the state parliament in Stuttgart, excursions to the Hohenneuffen, Strasbourg and Munich as well as one to Tübingen, with the presentation of the measures of the university city for the expansion of renewable energies.

"Above all, I found the different perspectives on the topic offered by the various teachers exciting," says participant Janie Towa Sakihama. The student, who also studies intercultural studies at home, was almost even more enthusiastic about being in personal exchange with students from another culture for the first time since the outbreak of the corona pandemic. The follow-up event of the Summer School funded by the Baden-Württemberg Foundation is planned for the coming spring. Then at Ritsumeikan University in Japan.