On Tuesday, September 20 and Friday, September 23, 2022, we held a two-day “Fall Consultation Session - Sharing Senior Student’s Experiences and Strategies” on ZOOM for students at the Osaka Ibaraki Campus! The purpose of this event was to help students get off to a strong start as they begin preparations for the fall semester, through talking directly with their seniors.
This event was conducted in Japanese in the rooms of the College of Business Administration, the College of Policy Sciences (Policy Science Major), and the College of Comprehensive Psychology, and in English in the rooms of the College of Global Liberal Arts and the College of Policy Science (CRPS Major). The Japanese rooms consisted of two sections: a liberal arts section for the whole group and a college-specific section. In the liberal arts section, we had a talk session on “preparation before starting the fall semester,” “how to choose classes,” “how to innovate a timetable,” “what parts of the syllabus to focus on,” and “advice on online classes,” based on the peer supporters' own experiences.
In the college-specific section, students were divided into breakout rooms of each college and talk session were held on selection of courses, seminars, and majors. In both sections, participants asked questions in the chat box as needed, and peer supporters responded to them. In the English rooms, we had a talk session about OIC facilities and tips and tricks for studying at the university, followed by an open discussion on two topics: living and studying, while answering questions from participants. 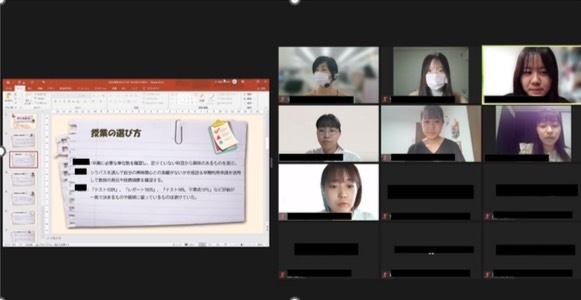 On Tuesday the 20th, the event was conducted for three colleges: The College of Business Administration, the College of Policy Sciences (Policy Science Major), and the College of Comprehensive Psychology. In the whole group section, participants were smiling and in a good mood, creating a friendly atmosphere for the talk among peer supporters to proceed in. During the talk, the moderator shared screenshots of the app that peer supporters use when deciding which courses to take in the fall semester, and the moderator elaborated on peer supporters’ answers, which gave a very clear picture of the strategies and experience of peer supporters.
In particular, I was impressed to hear that all of the peer supporters chose classes based on whether or not the content was interesting to them, and that they use the Early Use Request function and attended the first class to determine whether or not the class really suited them. I, myself always do these things before the start of a new semester, but hearing that other peer supporters are doing the same things made me feel a connection with them, and it was fun to hear the unique stories of their class selection successes and failures.
On Friday the 23rd, in addition to students from the College of Business Administration, the College of Policy Science, and the College of Comprehensive Psychology, English basis students from the College of Global Liberal Arts and the College of Policy Science (CRPS major) were also invited to participate in this event. In the session for the College of Business Administration, the College of Policy Sciences (major in Policy Sciences), and the College of Comprehensive Psychology, participants asked questions during the liberal arts section of the day, and we discussed these while interacting with the participants. It was notable that participants actively asked questions even during the college-specific section of the seminar, and that we were able to take the time to discuss the participants' concerns.
During the event, participants and peer supporters communicated interactively using the reaction button on Zoom. I think we were able to proceed in a friendly and easygoing atmosphere from start to finish by utilizing online communication tools and observing participants' reactions as appropriate. It was also notable that participants actively asked questions in the rooms of the College of Global Studies and the College of Policy Studies and Science (CRPS major). Specifically, there were many questions about classes, part-time jobs, the university cafeteria, dormitory life, and so on.
Many participants approached us for information of their own volition, and we were able to create a friendly atmosphere, which made the hour fly by! Most questions from English basis students were asked from the perspective of living in Japan, which was a different point of view compared to that of the Japanese basis students. It was very refreshing to hear, and I was able to learn what they were wondering about and what they wanted to know about. It was a great reference for me for future events aimed at English basis students.
I think this project was meaningful in that peer supporters were able to share useful information from the perspective of a student based on their own experiences and learn and discover new things by listening to other participants' questions and answers. We received comments like “I was somewhat anxious about the fall semester, but listening to the stories of senior students and having them answer questions helped me to think more specifically about what I should do,” and “It was good to get an image of seminar selection by listening to senior students.” As the organizers, we are very happy to hear that many participants said that they were able to get an image of what they should do going forward.
As the organizers of this project, we thought of questions and answers in advance, in anticipation of what the participants would be concerned about, and conducted the talk sessions in the style of radio shows while keeping an eye on how participants were reacting. We were able to proceed in a friendly atmosphere from start to finish, and since the talks were given as if we were talking with friends as normal, I think it became an event that anyone could easily engage with. I would like to implement future events that also allow for interactive communication with the participants!
SSP plans to continue to hold events to support everyone’s student life, so keep an eye out for them! We will post relevant information on manaba+R, Twitter, and the SSP homepage!
(Reported by: SSP Peer Supporter (OIC), Nao)
NEWS一覧へ